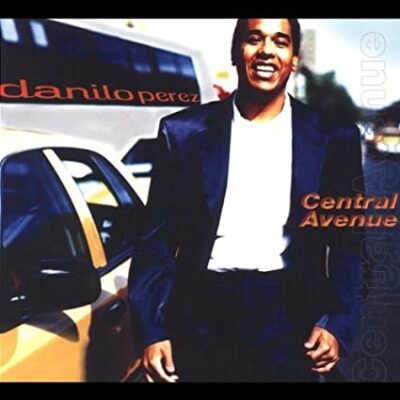 It is an old concept, but one worth keeping in mind as we muddle on through the turn of the century. This is a time when the choices seem to have been reduced to nostalgia or facile, cut-and-paste esthetics.
In Central Avenue, Danilo Perez mixes blues, Middle Eastern-tinged melodies, and the folk singing of his native Panama, conjures up Thelonious Monk playing 21st-century danzones, sets Indian tablas next to Caribbean tumbadoras and makes it all sound familiar.
More than that, it sounds inevitable.
Perhaps it is.

Perez is one of the many of us living in the United States in a moving border. It’s a boundary crossed secretly, in plain sight, every day, many times a day, by necessity and chance. It’s a crossing that turns us all into interpreters and translators, tour guides and indocumentados. We are respected shamans and brutes. Our images are a reflection in a funhouse mirror. Our language is a collection of found words and borrowed memories. We construct our past of what we create. We know who we are. It’s just we barely recognize ourselves sometimes. No wonder we can always tell which side of the border we are on, but not where home is.
Of this, Perez creates fresh, new music that feels lived-in.
It has not happened by chance.

The quick smile and easy-going manner have always belied a thoughtful artist with a curious, disciplined mind. After all, this is someone who, in a few years, and almost casually, has methodically built a very personal, original vocabulary. This is a virtuoso pianist who, it seems, has always known the value of what not to play.

In Central Avenue, his fourth album as a leader, Perez is pausing to re-examine his roots, sum up his discoveries and chart his future path.
The title alludes to the main boulevard in Panama City, Panama, which Perez remembers as “incredibly diverse and cosmopolite, a place for everybody: rich, poor, tourists, locals, you name it. It’s a real common ground.”

Musically, as he refines his technique and his aims, the language has become even more discreet. There are no look-at-me displays of innovation here — although some, just check Blues For The Saints, Impromptu (Conversations) or Panama Blues, will be hard to miss even on first hearing. For the most part, in Central Avenue, things happen in the very fabric of the music that turns our expectations and assumptions as listeners inside out.
After a rather orthodox introduction and once-around, “Lush Life” is reinterpreted here as a sort of very slow chacarera, an Argentine folk rhythm. John Coltrane’s “Impressions” is performed as a combination of rumba guaguanco and abakwa, an Afro-Cuban rhythm — and then rather than in the proper 2/2 or 4/4 time signature, which gives the music its characteristic rounded, rolling groove, this version is played in 5/4, which creates a subtly unnerving effect.

“Monkiana Suite” plays like a coda to PanaMonk, Perez’ debut album for Impulse. “Playground” hints at “Hot Bean Strut” but with a flamenco approach to meter changes. “Sideways” is a tribute to Monk’s “Mysterioso” via Chick Corea’s “Matrix” with a couple of tumbaos (Latin vamps) thrown in for good measure.

But it’s the last piece in the suite, “Love in 5,” which underscores the theme of the album, revealing a startling mix of sources under a conventional song form. It is basically a blues ballad — with a twist. “I hear the elements of the Ellington-Strayhorn ballad,” says Perez. “But the bass is playing a sort of very slow abakwa.”

The last two compositions in the set have the most obvious Panamanian roots. Cosa Linda has a clean, open feel and a subtle groove. “It’s like taking the Keith Jarrett Trio and putting rice and beans on the side,” says Perez before breaking up laughing.
Panama Blues, perhaps the most ambitious composition in this set, is a virtual jam session. In Panama, the pianist recorded Raul Vital, a folk singer from the Panamanian countryside, improvising a mejorana, a style from the interior, mountain region of Panama. Perez then built the piece around the singing in a New York studio.
The completed recording hints at swing in the trap drums had put an Afro-Cuban tumbao in the percussion and floats over a bass line that draws from Peruvian festejo rhythm.
It reads more complicated than it sounds.

There is something real, coarse, and tender in that voice, like the touch of an old, calloused hand, but also elusive, profound questions about willing an identity out of shards of sound, echoes, and memories.
In fact, as in much throughout Central Avenue,, there is something very familiar in “Panama Blues,” as a memory brought back by a scent, and also the slow, bittersweet realization of discovery.
The effect can be both disorienting and liberating, but then, such is life at the border. Of those burdens and those promises that make us new, Danilo Perez is constructing his own central avenue, his own common ground, piece by piece. Please do come in.