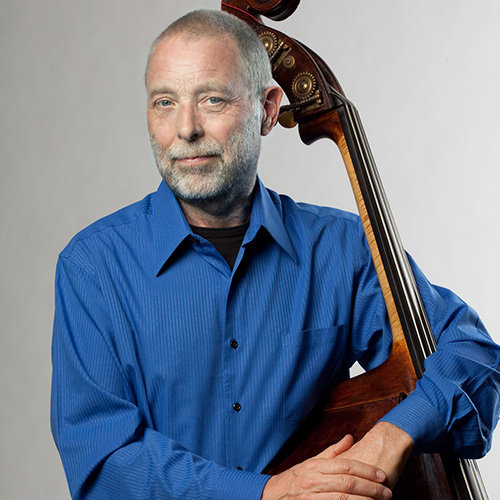 When the Department of Studio Music and Jazz faculty invited bassist, composer, and bandleader Dave Holland to be its fall 2011 guest artist in residence, they expected Holland’s visit to be memorable for students. What perhaps they didn’t foresee is that Holland is a natural teacher whose influence on the students was unforgettable.

“First and foremost, he is widely recognized by musicians, students, and faculty members as one of the most important and influential artists of his generation,” says bassist Charles “Chuck” Bergeron, a lecturer in jazz and musicology at the Frost School and faculty mentor for the school’s Stamps Jazz Quintet. “He’s also is a master educator. He has a deep passion for teaching and helping to raise the understanding of this art form.”

Holland’s weeklong residency included lectures and masterclasses as well as rehearsals for a September concert during which he performed his music with the Stamps Jazz Quintet and the Frost Jazz Septet. Watching Holland interact with students—always calm, understated, organized, clear of purpose, and patient—it’s easy to forget that his “day job” for most of his career has been primarily stage and studio.

When asked about the impact of the residency, Bergeron didn’t hesitate: “A lot more practicing—by the students and the faculty.”
In fact, the Holland residency engaged faculty and students in the life of a musician who translated a childhood self-guided interest into an iconic career. Clearly eager to pass on his experiences on the next generation, Holland embraced teaching at the Frost School with as much fervor as the students embraced him.

Born in 1946 in Wolverhampton, England, Holland began building a solid reputation in the London jazz scene as a teenager while also studying under James Merritt, principal bassist of the Philharmonia Orchestra and, later, the BBC Symphony Orchestra.
“The fact that I was in school didn’t stop me from playing gigs,” Holland recalls. “I was working every night and sometimes two gigs a day. I’d be playing upwards of six to seven hours at the age of 19. I was playing with bands—mainstream jazz, traditional New Orleans jazz, cutting edge, contemporary free jazz—I mean everything. I wanted to experience all of it.”
Miles Davis first heard Holland play at London’s Ronnie Scott’s in 1968. Since then, Holland’s role has been to anchor powerful, often game-changing groups led by artists like Davis (Holland appears in epochal recordings such as In a Silent Way and Bitches Brew), Sam Rivers, and Anthony Braxton, or as the leader of his own ensembles.

While Holland first began learning to play an instrument on his own, he rejects the notion that he is self-taught.
“Obviously, nobody is ever self-taught because you learn from the people who are around you,” he says. “The people who guided me were older musicians who knew more about the music and would sit down with me, patiently, and show me things. A lot of it was learned like that, or by listening to records. Being able to experience the feel and the tone and the energy of what’s going on in the record—you can’t represent that on paper.”
Holland views complete reliance on books and transcriptions as one of the mistakes students make when first honing their craft. In recalling his own learning process Holland talked about listening to a recording up to a hundred times to gradually learn the sound and phrasing. He stresses finding the balance between the oral and written traditions in music.
Miles Davis, Dave Holland and Jack DeJohnette,
in performance in the late 1960s

“There has to be a balance between studying and reading and actually going out and learning from the live experience and playing with other musicians,” he says. “There’s a tradition in jazz of it being passed down generation to generation, and that’s a bit of what’s missing at the moment.”

“Students play with other students, so the cross-generational experience is not as present as it was when I was a young musician. That’s why I’m always playing with students in rehearsals. I always make sure there’s a moment when I can play the bass with them, so they can get an idea of how it feels from my perspective.”

Holland describes the oral-written balance as an emotion-intellect balance, something he pursues in his playing.
“I like the feeling of my technique having to catch up with my ideas. I don’t want my technique to be in front of my concept because then it becomes the end of the music rather than the means to the end. Then you lose a great deal in the music.”
Holland is so keen on keeping the cross-generational tradition of jazz alive because it has been the source of some of his most profound growth as an artist. He recalls a time, around age 25, when he became fixed on eliminating several elements from his music, thinking they weren’t “hip enough, modern enough, or relevant at the time.” He was into open form playing, letting it flow, so he didn’t want to set up changes or vamps. Listening to Holland play was saxophonist, composer, and bandleader Sam Rivers, who offered some sage advice.
“He came up to me and said, ‘You know, why don’t you set up a vamp occasionally? Why don’t you set up a tonality? Use all of your experience; don’t leave anything out. You’ve got a lot to bring to the table, so why not use it all? ’”

Holland recalls the advice gave him pause at the time but didn’t take full effect until he started his own band in 1982: “I started thinking about getting a vehicle that would enable me to utilize all of my experience as a player, going back to playing standards and rock and roll and everything—in a way that made sense. That’s really where my music came from; it evolved for quite a while. I believe progress is putting one foot in front of the other. That’s basically how I work.” 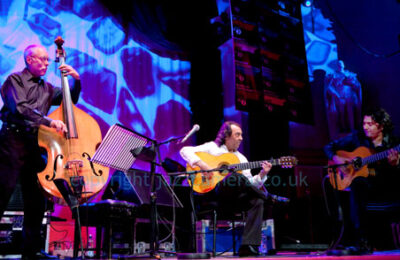 Holland’s artistic evolution makes him a rich, dynamic resource for students who are finding their own voice. Holland’s teaching style pays homage to Merritt, a classical bass player, whom Holland describes as a “gentle spirit” who always treated his students with respect.

“He had a very thorough way of approaching teaching,” Holland says of his first teacher. “He took you gradually, step by step discovering the instrument, and he made you do problem-solving in terms of how to improve.”

Bergeron describes Holland’s Frost School residency as “very well planned and thorough.”
He was particularly impressed by Holland’s small group coaching.
“He rehearsed every afternoon with two different small groups with the goal of preparing them to give a concert of his music at the end of the week,” Bergeron says. “Dave treated the students as he would professionals in the real world, which was an incredibly valuable experience for them.”
Treating students like professionals, Holland agrees, is the key to growing the musical community in a way that celebrates tradition while also inspiring innovation.
“What I try not to do is be sentimental about the past and say, ‘Oh you know, back in the day,’” Holland says. “Time moves on. What we need to do is see how we can be creative with the situations we have now.
“Schools like [Frost] are addressing it by having visiting artists and by having a strong faculty that’s present all the time and really engages with the students,” Holland continues. “We need [a faculty] that doesn’t create a barrier with the students, that doesn’t set up a teacher-and-student [relationship] but says we are all part of a musical community, sharing information and different degrees of experience. Music is a communal activity. We are not up there playing for ourselves. We are playing for each other and supporting each other, and the greatest moments in music for me are when there is collective creativity going on.”

When asked what he hoped would stay with Frost students beyond his residency, Holland says, “I want them to realize that they can be their own teacher and that music is a fascinating life-long journey of exploration. The only thing that’s holding them back is their ability to commit to that journey.”

An edited version of this story appeared in the University of Miami Frost School of Music’ SCORE Magazine, Spring 2012