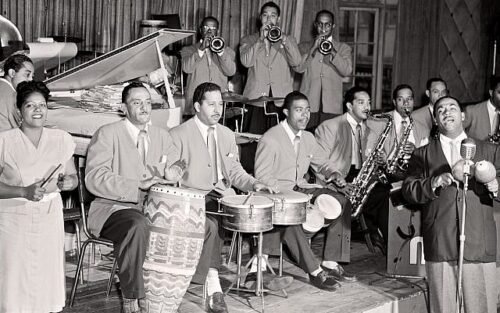 The great Machito (center) and his Afro-Cubans featuring Graciela (left)

Popular music offers a window into the society that creates it. But in “Jazz,” the 10-part, 19-hour documentary that winds up its PBS run next week, filmmaker Ken Burns peered at life in the United States through a narrow window.
He has construed jazz — and the society that created it — almost completely in terms of black and white. In the United States of “Jazz,” the Latin music and musicians who were so important to the development of this art form — and Latinos and their culture in general — barely merit a footnote.

This failure, of course, reflects the biases and cultural limitations of Burns and his advisers. Their perspective, however, is one widely shared: In its obsession with race, the United States is stuck on the idea of an imaginary country populated only by descendants of white Europeans and their former slaves. Nobody else counts.
This is an astounding notion, especially given that, with more than 30 million Latinos living within its borders, the United States is actually the fifth-largest Latin American country.
Racial issues between blacks and Latinos, and the balance of political and economic power both between those two groups and in relation with the white majority, will help define life here for this century and beyond. But in the nation Burns explores in “Jazz” — after hours of music, images from all over the country reaching back to the 19th century and interviews with 58 subjects, none of them Latino — Latinos are simply not relevant to the story: not then, not now, not musically and certainly not socially.

“If you can’t manage to put tinges of Spanish in your tunes, you will never be able to get the right seasoning — for jazz.” So said, in the late 1930s, Jelly Roll Morton, who knew something about the subject but was no longer around to serve as a consultant for the PBS series. As a result “Jazz” barely alludes to the Latin influences in New Orleans — and even then, “habanera” is mispronounced in the narration and described as a “dance rhythm from the Caribbean,” rather than from Cuba.
Other mentions of Latin contributions to jazz include a 2-minute-and-32-second sequence about bossa nova; a nod to Cubop that focused on Dizzy Gillespie, the non-Latin champion of Latin jazz; a passing mention in a discussion about jazz “combinations” with other genres of music; and a glance at Cuban pianist Gonzalo Rubalcaba. Not much more.

There is no mention of historic Latin jazz figures such as trumpeter Mario Bauza (who played a decisive role in the birth of Latin jazz), popular timbalero and bandleader Tito Puente or arranger Arturo “Chico” O’Farrill. And when looking forward, Burns does not see fit to include, in his list of 11 new artists, figures such as Panamanian pianist Danilo Perez or Puerto Rican saxophonist David Sanchez. These are not Latin-jazz players working in some stylistic ghetto, but superior musicians who happen to be Latinos and who, for the past decade, have been developing a pan-Latin view of jazz that might very well be the music’s future.

As it surveys the evolution of jazz, Burns’s opus also purports to trace the momentous events and social trends of the century just ended (wars, the Depression, the growth of suburbia, drugs, etc.). If omitting Latino musicians is a peculiar choice, ignoring Latinos more broadly in the life of the United States is just plain troubling. For all the lip service to census statistics, for all the politicians blithely mangling Spanish as they look for votes every couple of years and for all the money made on Ricky Martin’s bonbon, Latinos remain largely invisible to mainstream America.

And for Burns, a terrific storyteller obviously in love with the myth of America, such an oversight also represents a missed opportunity. He rightfully sees jazz as a made-in-the-U.S.A. cultural product. He has acknowledged not being a longtime fan of the music, but he clearly appreciates jazz, especially as a marvelous metaphor for democracy at work. He hears it in each musician expressing his or her individuality and creativity within the group, in the tensions between personal freedom and common good.
But Latin jazz offers its own insights about American life. Early on in “Jazz,” Wynton Marsalis — who had an enormously influential role in shaping the series — speaks about how “the real power of jazz is that a group of people can come together and . . . negotiate their agendas with each other, and that negotiation is the art.”

Drawing from several cultures and traditions, played by groups made up of musicians with often profoundly disparate backgrounds, Latin jazz is a prime example of such negotiation — and more. Here is a music with old, deep roots embracing the New World, a music rich with memories but looking for a future unburdened by history, a music streetwise and brash but also touchingly fresh, hopeful, generous. It is a soundtrack for a nation of immigrants.
Pick a name, any name: Bauza, Puente, Frank “Machito” Grillo, Leandro “Gato” Barbieri, Jose Curbelo, Ray Barretto, Airto Moreira, Paquito D’Rivera, Jorge Dalto, Michel Camilo, Lalo Schifrin, Mongo Santamaria or “Chocolate” Armenteros, just for starters, and behind each, you’ll find a story, an American story. But you won’t hear any of them in “Jazz,” and that’s too bad.
By perpetuating the notion of a United States, and an American culture, drawn only in black and white, “Jazz” doesn’t just fail Latinos or Latin music fans. It fails us all.

This essay was published in The Washington Post, January, 2001