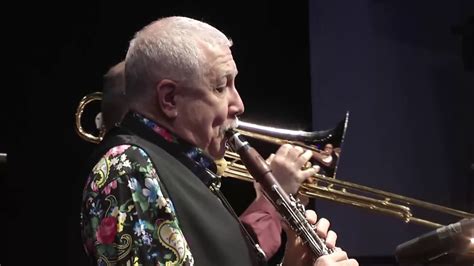 Paquito D’Rivera has been tweaking Mozart for awhile.

Even as he was dazzling audiences in New York as a member of the Afro-Cuban jazz-rock group Irakere in the summer of 1978, invoking the spirits of the Orishas, Monk, and Charlie Parker, D’Rivera was also leading the band on a piece he called “Adagio on a Mozart Theme.” It was his arrangement of the lovely Adagio from Wolfgang Amadeus Mozart’s “Clarinet Concerto in A major, K. 622.”
But where Mozart was stately, letting his emotions unfold with an almost somber, measured elegance; D’Rivera was sunny tropical, full of joy and bursting with humor — and of course, as jazz musicians have been known to do, he played the tune and then he improvised.
Some, no doubt, must have thought of it as some sort of musical prank. It wasn’t.
Looking back, it was a rather insightful statement — expressed in D’Rivera’s irreverent style.
It also foreshadowed much of what was to come in his extraordinary career.
“It meant doing with Mozart what I did with Cole Porter,” said D’Rivera in a recent conversation, held in Spanish. “I mean, Cole Porter wrote those great pieces for Broadway, he didn’t write it for us, jazz musicians, to improvise on them. And he wrote them to be sung, and we play them without the words.”
And then, there was something else.
Formally trained as a classical musician, D’Rivera says he has often daydreamed about how the music of those hallowed European composers would have sounded had they had been born in Havana, Caracas or Buenos Aires. “I love the idea of a Beethoven sonata played to a Peruvian rhythm,” he deadpans.
And so we arrive to tonight’s concert, Around the Americas, featuring D’Rivera with his sextet and the string ensemble Quinteto Cimarrón. It brings together European classical music, Latin American and Caribbean music and jazz. It also plays as a summation, thus far, of a life in music lived with curiosity, talent and a “Why not?” attitude.
“Jazz is a genre that offers so many possibilities,” he says. “I can play marvelous melodies, but I can also improvise. That’s an opportunity I don’t have with Brahms’ ‘Clarinet Quintet in B minor.’ It’s a wonderful piece, but if he just gave me a little space to add a note here and there, something that is not already written, it could be so much fun. And why not? Why not interpret it my way?”
On his most recent projects on record — Jazz Meets The Classics, with his sextet, and Aires Tropicales, with Quinteto Cimarrón — D’Rivera re-imagines Chopin, Mozart and Beethoven (the Adagio Cantabile of his Piano Sonata No 8, Op. 13 “Pathetique” as, yes, “Beethoven Perú”) but he also swings through a mambo and a cha-cha-cha and five movements from “Aires Tropicales,” his piece for wind quintet arranged for strings.
A superior musician often disguised as an entertainer, D’Rivera has the humor and the musical tools to entice an audience down a rabbit hole and then have it come out in some unexpected place, both vaguely familiar and new, a place where Beethoven is Peruvian, Mozart swings and sometimes a mambo is not just a mambo.

Notes for Jazz at Lincoln Center´s Paquito D’Rivera: Around The Americas, March 2015