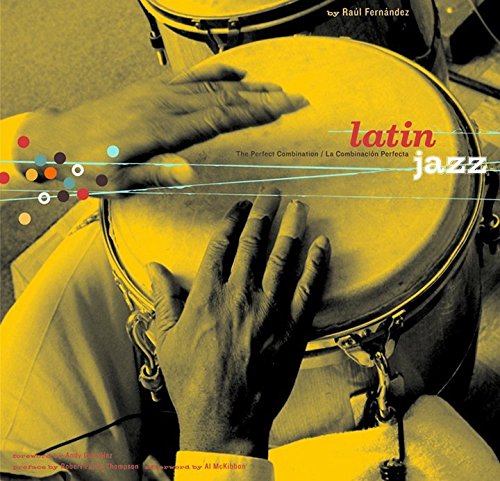 There is a 1910 poster for a masquerade ball given by The Orleans Athletic Club at the Economy Hall in New Orleans, admission 25 cents, featuring the “popular favorite” Imperial Band, led by Manuel Perez. A few steps away hangs a dignified photo of Pedro Stacholy’s Cuban Jazzband, taken in Havana, circa 1920.

There’s the familiar — Dizzy Gillespie’s unmistakable bent trumpet — and the surprising — a rare marimbula, a wooden box with metal resonators that functioned as the bass of early, rural Cuban music. There is a black and white clip of a young Tito Puente, already a superb musician and showman and a segment featuring Andy Williams presenting “a wild and wonderful new group” – Cuban conguero Mongo Santamaria playing ” Watermelon Man.” Nearby, Xavier Cugat and his orchestra, one of the great popularizers of Latin music in the United States, is playing on an old Philco radio — a recording of a 1930s live broadcast from the Statler Hotel in Chicago.

The images, the names, the artifacts and the sounds – all part of “Latin Jazz: La Combinacion Perfecta,” a Smithsonian Institution multimedia bilingual traveling exhibition that opened Saturday at the Smithsonian’s Arts and Industries Building — tell a remarkable story, an American story, hidden in plain view.
For more than a century, Latin jazz has been playing in the soundtrack of our lives.
How could it not?

It’s the music of a country of immigrants — a music of possibility, born of loss and reinvention, of pain, transformed by hope. It’s a music of deep roots but always new; a paradox of big muscles and nimble feet, street-savvy and worldliness.
And it’s all there in the sounds – in the easy grace of “The Peanut Vendor,” in the insolence of “Manteca” and the simple, contagious joy of “Oye Como Va.”
“Many things surprised me in doing the research, but what really struck me was how important and how deep the presence of Latinos in jazz has been all along,” says Raul Fernandez, curator of the exhibit and author of the accompanying “Latin Jazz: The Perfect Combination/La Combinacion Perfecta” (Chronicle Books). “I was surprised to find how many Latinos, mainly Mexicans and Cubans were playing in New Orleans in the early years, for example. Or to find that the saxophone was brought to New Orleans by the [popularly called] Mexican band (Mexico’s 60 to 80 strong Eight Cavalry Military Band, which visited New Orleans for the World’s Cotton and Industrial Exposition, 1884-85).
“From the beginning,” says Fernandez, a professor of Social Sciences at the University of California, Irvine. “ there is a presence and a continuity.”

Then again, as music historian John Storm Roberts simply stated in “The Latin Tinge,” his influential book on Latin music in the United States, “Latin American music [is] the most important outside influence on US popular music in the last 100 years.”
Even a cursory look back reveals that every decade has been marked by a significant Latin trend – from the tango in the 1910s and 20s and the rumba in the 30s up to the latest “Latin Explosion.” Yet still, mainstream American culture reacts every time as if before a startling social and ethnomusicological discovery.
Livin’ La Vida Loca once meant doin’ the mambo, there was a Carmen Miranda well before a J Lo and a Ricky Ricardo before a Ricky Martin.
Ferdinand “Jelly Roll” Morton was already talking about the Latin influence in his famous dictum — “… if you can’t manage to put tinges of Spanish in your tunes you will never be able to get the right seasoning … for jazz.”

Including film (a documentary featuring interviews and rare, vintage footage), audio stations, panels with text and photographs, a hands-on area with an instructional video, sheet music, and a few musical instruments, “Latin Jazz: La Combinacion Perfecta” offers a concise but entertaining and useful historical overview of the music and the people who created it.
While the space is crowded, there’s a logic to the exhibit that can be discerned.
An opening section, focusing on the beginnings of the music in Havana and New Orleans, brings into focus people such as the influential Mexican clarinetist Thomas Tio and his family. His grandson, Lorenzo, tutored master jazzmen such as Sidney Bechet and Barney Bigard and Jimmie Noone.
Another area is reserved for drummers, including Chano Pozo, Armando Peraza, Mongo Santamaria, Francisco Aguabella, Patato Valdes, and Candido Camero. “The music was built on their shoulders,” says Fernandez. “And I don’t think they have received the recognition they deserve. I’m partial to them.”

But others get their due also. Trumpeter Mario Bauza, the music director and mastermind of Machito and His Afro-Cubans, is acknowledged. A formally educated musician with a deep knowledge of, and practice in, popular Cuban music, Bauza went on to become the director of Chick Webb’s Orchestra and a member of Cab Calloway’s band. It was Bauza who organized Machito’s band and articulated the fusion of American jazz harmonies and improvisation and Cuban rhythms. There are nods to figures such as composer and arranger Arturo “Chico” O’Farrill, who dressed the music in black tie in masterworks such as “The Afro Cuban Jazz Suite;” and Cuban pianist and bandleader Chucho Valdes.
What this exhibit underscores is continuity, the logical progression if you will, between the music of New Orleans and the Latin jazz of today.

Morton’s “Latin tinge” already can be heard clearly in early pieces such as Morton’s “New Orleans Blues” or W.C Handy’s “St Louis Blues.” It exploded into full view in the 1940s, most notably at first with the work of Machito and His Afro-Cubans. Then Gillespie brought it to the attention of a different audience.
He had asked Bauza, his former Cab Calloway bandmate, and lifelong friend, for someone to play “them tom tom things,” as he then called the conga drum. Bauza recommended a newly arrived Cuban percussionist and dancer, Luciano “Chano” Pozo. 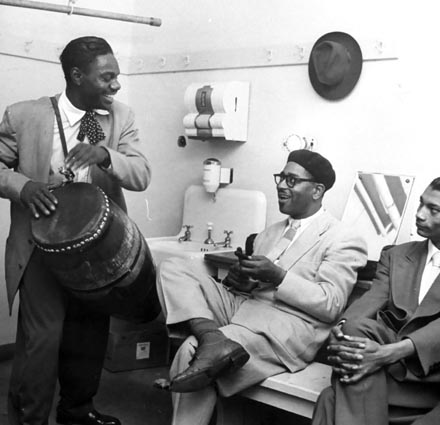 The Gillespie-Pozo collaboration was cut short (Pozo was shot dead in December 1947) but left a legacy of gems such as “Manteca,” “Cubana Be Cubana Bop” an “Tin Tin Deo.”
Bassist Al McKibbon, who worked with Miles Davis in the “Birth of the Cool” sessions and later with pianist George Shearing and vibist Cal Tjader, among others, was a member of Gillespie’s band in 1947. Bandleader Stan Kenton had already been experimenting with Latin music and musicians (recording with Machito’s rhythm section, for example) but the Latin and jazz worlds still largely moved on parallel tracks. The idea of adding Pozo, an Afro-Cuban conga player, to one of the elite bop bands at the time was not received with great enthusiasm.
“When Dizzy mentioned to me that he wanted to hire a conga drummer I was against it,” recalled recently McKibbon with a chuckle. “I had been watching Machito and [pianist and bandleader] Noro Morales … and I’d realized that the accents were in a different beat that we were playing so I told him ‘man it’s going to be a real train wreck when we get together.’ And Dizzy said ‘no, it’s going to be fine. You watch.’ And it was. He was a visionary.”

Still, he remembers, “At the beginning, the guys were a little standoffish because they didn’t realize the importance of what was happening. But I did. I was always interested in drums when I was a kid in Detroit, Michigan but I didn’t know about hand drums. We had no access to them. The only thing I knew about hand drums was Africa and Hollywood movies. But then I got to New York and I saw those Latin bands at the Palladium. And Chano was something else. Jazz musicians always talk about how jazz comes from Africa and blah, blah, blah and yeah, basically they believe it but not really, because all the good players were black Americans — and here [with Chano Pozo] you saw the direct connection.”
The audio stations offer first-person accounts and a sampler of different artists and styles. It’s a small and broad selection that might work as a teaser. It would have been fun and educational to accompany the panels of the major figures with samples of their work. (Please do check Rene Touzet’s “El Loco Cha Cha Cha” and listen for the bass in the background. Yep, that groove is the source of “Louie Louie.” Blame it on the cha cha chá )

Finally, there is a nod to the present and future of Latin jazz.

These days Latin jazz has become arguably the richest, and most promising, stream in contemporary jazz with the work of a new generation including brilliant young artists such as Panamanian pianist Danilo Perez, Puerto Rican saxophonist David Sanchez, Argentine big band arranger, and composer Guillermo Klein, Puerto Rican trombonist William Cepeda and Cuban pianist Omar Sosa, just to name a few.
Their work, which draws freely from indigenous rhythms and styles from throughout Latin America, has exploded the conventional notions of Latin jazz as mainly a fusion of Afro-Cuban and jazz elements.
“Latin Jazz: La Combinacion Perfecta,” which will remain open in Washington until January 18, 2003 before embarking on a four-year, 11 city tour across the United States, is the final installment of the America’s Jazz Heritage program, the 10-year initiative was funded by the Lila Wallace-Reader’s Digest Fund to bring jazz to American audiences. Accompanying the exhibit there is the book and a CD, a sampler of different styles and approaches to Latin Jazz.

“I want people to come out of this exhibit with a smile,” says Fernandez, the curator. “If not dancing, at least moving. I want them to have a good feeling. This music is such a joy, very uplifting.”

Andy Gonzalez, arguably the top bass player in Latin music, is also a collector and avid student of the music. He recalled being “fascinated” as a kid by the sound of a Cal Tjader record, well before he became a musician and says he wants recognition and a wider audience for the music.
“What I want with this exhibit is to give some recognition to a music that has not gotten its due,” said Gonzalez, who was an advisor to the show. “I feel it’s important its place in history be secured. This is a most important genre of music because it involves a fusion of cultures — and that’s part of what America is supposed to be about.”

This story appeared in The Washington Post in October, 2002