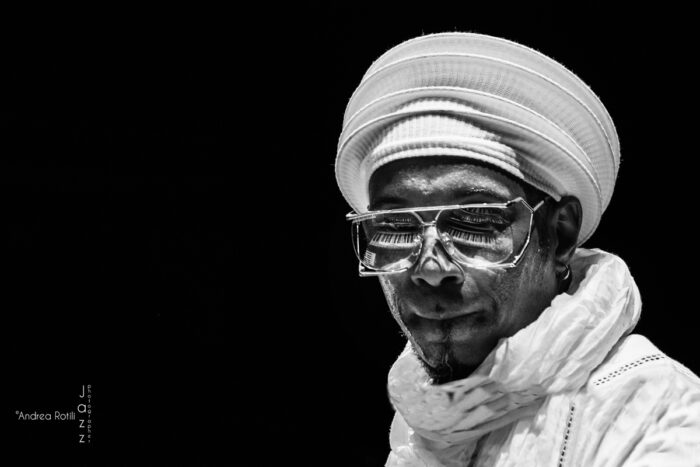 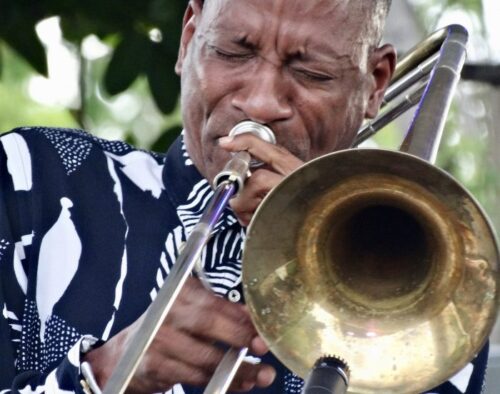 William Cepeda. Photo by Tomas Peña
Globalization has long subverted notions of what is local in popular culture.
More to the point, communications and the increasing reach of the entertainment industry have challenged the idea of roots music while shining a light on intriguing connections. What once was thought as a local invention often has turned out to have its origins a world away — and have collected echoes from other cultures along the way. Authentic popular culture is, after all, an oxymoron.
Cuban pianist Omar Sosa and Puerto Rican trombonist William Cepeda are two young Latin jazz composers, arrangers, and bandleaders who, in their latest releases are coming to terms with their identity in a global culture.Sosa — who arrived in Oakland in 1995 via Ecuador, where he had lived two years, and moved to Barcelona, Spain, two years ago — uses a global palette of sounds to tell his personal story. Cepeda — who is a member of one of the true dynasties in traditional Puerto Rican music and commutes between Brooklyn, NY and Loíza, Puerto Rico — brings his small home town and its rich music to a universal sound. In both cases, the results are exhilarating. 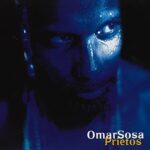 Prietos (Ota Records), a term for black in Cuba and some Latin countries, is Sosa’s seventh album as a leader and fourth working with a large ensemble. Clearly, his pan-African-pan-Latin American sound has grown both, more expansive, and more sharply drawn. Leading a septet augmented in different tracks by a number of guest musicians, singers, and even a poet, Sosa takes an Afro-centric view to Latin jazz, but rather than didactically point out the connections between African and neo-African cultures in the Americas, he layers his references and lets the music play out.

Instrumentations, grooves, and stylistic elements of music from Cuba, Brazil, Morocco, Venezuela, Ecuador, and, yes, the United States, frame and bounce of each other, re-contextualizing familiar sounds. A Milesian, Harmon-muted trumpet, and a bass clarinet play over balafons and marimbas (West African and American marimbas). There is rap in English but also praises to Eleggua, the Santeria deity who rules the crossroads, sung in ancient Yoruba. In “Takes A Second,” a horn passage hints at salsa, then Cuban son (an Afro-Hispanic rural style that is the roots of salsa), then everything dissolves in a feverish bop saxophone solo, which in turns becomes a sensual son, again.
In Sosa’s vision, this is all African music.
It might be a bit disorienting at times – is that a Moroccan Gnawa rhythm playing behind the prayer to Afro-Cuban Santeria deity Yemaya in “Mother Africa”? Was that a nod to Dizzy Gillespie and Chano Pozo in the mambo-ish “Cha-Amarillo”? How do you fit North African and Brazilian grooves, gospel music, and Sun Ra-goes-Latin horns in the title track?. Still, the results have not only musical coherence but also intellectual and emotional integrity.
Because of it, the sum is greater than the parts.
It’s early, but “Prietos” is a candidate for record of the year in Latin jazz. 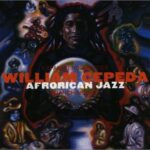 Cepeda, who served an apprenticeship in Dizzy Gillespie’s big band, the late trumpeter Lester Bowie and trombonist, Slide Hampton among others, has been revisiting his roots (check “My Roots and Beyond’ (Blue Jackel, 1998)). But in “Branching Out,” his growing maturity and confidence are reflected not only in the writing and the playing but in the chances taken.

“Cosa Nuestra,” a terrific updating of the aguinaldo, a style within jibaro music, features classic singing by the great jibaro singer Andres Jimenez, but also a tight, smart brass arrangement. In “Washiba,” Cepeda uses Middle Eastern-sounding horn lines over a bomba rhythm, post-bop improvisations, tablas, a didgeridoo (indigenous Australian wind instrument) and a Moroccan sintir. In “Toshiko,” a poem by the great Puerto Rican lyricist Tito Curet Alonso is declaimed over a rolling bomba groove punctuated by horns and a Japanese koto. “Let’s Have Fun,” built on a bomba groove called “holandés,” explodes with a boppish energy and urgency. As with Sosa’s work, there is an organic feel, a logic to the twists and turns, and combinations.
As notions of what is global and what is local become increasingly blurred so are points of reference, notions of personal identity and belonging. In their work, Sosa and Cepeda speak of having roots in a global culture as not only imaginable but possible.

This music is not just beautiful; it’s fearless.

This feature appeared in The Washington Post, in May 2001.