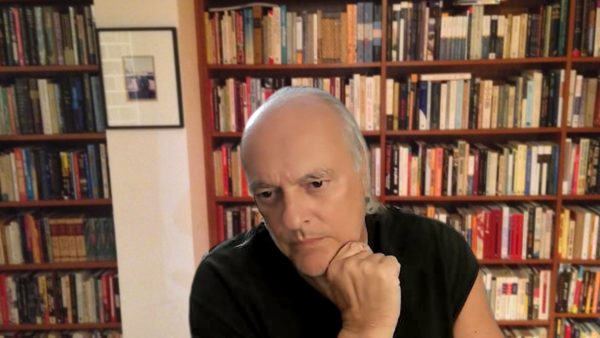 Fernando González is an independent writer, editor, and musician. He contributes to the digital arts magazine Artburst Miami, JAZZIZ Magazine, and the music blog Jazz With An Accent.

A GRAMMY-nominated and EMMY-winning writer, his past professional affiliations include staff writer for The Miami Herald (1993-1999) and The Boston Globe (1988-1993); a cultural correspondent for The Washington Post (2000-2005).

He was also the Managing Editor for JAZZIZ magazine (2003-2008) and the pioneering bilingual web portal, El Sitio (1999-2000). Other professional highlights include writing about arts, culture, and technology for the John S. and James L. Knight Foundation’s website, and Stanford University‘s JSK Journalism Fellowship program. He also contributed commentary for National Public Radio’s Morning Edition as well as features and music columns for Downbeat and JazzTimes. He has written program notes for venues such as Carnegie Hall, Jazz @ Lincoln Center, The Town Hall, New York City Center, the Adrienne Arsht Performing Arts Center (Miami), and events such as the Edinburgh International Festival, Scotland.

He worked as the Associate Editor for Print & Special Projects for The Latin Academy of Recording Arts & Sciences (2011- 2019); and in 2019, he joined the editorial team of the Miami Book Fair as Associate Editor and writer. Complementing his work as writer and editor, González has lead workshops on writing and music criticism as a guest lecturer at Berklee College of Music, Valencia Campus, in Valencia, Spain (2017-2019).

González curated, hosted, and produced Jazz With an Accent®, a 10 hour series on global jazz for 88.9 FM WDNA in Miami (2010), and was the Curator of Jazz Programming for the Arsht Center, Miami (2005-2007). He also translated and annotated Astor Piazzolla, A Memoir  (Amadeus Press, 2001) and curated, annotated, and produced the CD Universe of Rhythms: The GRAMMY Guide to Latin Music, for the National Academy of Recording Arts and Sciences’s inaugural Latin GRAMMY Awards (2000). He also wrote the children´s book Gloria Estefan Cuban-American Singing Star (1993) for Millbrook Press’ Hispanic Heritage Series.

In 2012, he was nominated to a GRAMMY for his liner notes for Pablo Aslan’s Piazzolla in Brooklyn. Previously, he had won an EMMY as Senior Editor and Writer for the documentary Notes From The Mambo Inn: The Story of Mario Bauzá (WGBH, Boston, 1991); and was nominated to an EMMY and won a Gold Award from CPB as Associate Producer and Writer for En Clave, a special on Latin music hosted by Rubén Blades (WGBH, Boston, 1992)

Born in Buenos Aires, Argentina, González majored in math at the University of Buenos Aires before pursuing music full time. He moved to the United States to attend Berklee College of Music, majoring in Composition/Film Scoring. He also studied composition with George Russell and electronic music with Robert Ceely at the New England Conservatory and independently with guitarist and composer Ralph Towner.