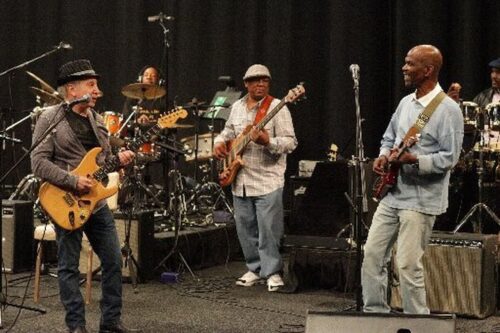 Paul Simon with South African musicians Bakithi Kumalo and Ray Phiri at a rehearsal for the Graceland reunion concert.

More people in the United States are exposed today to more music from around the world, more regularly, than at any other time in history.

Paul Simon writes lyrics to South African rhythms and then tours with a show featuring South African performers. David Byrne compiles an album of selections by Brazilian pop musicians; marked “Volume 1,” it suggests that more are to come. The Bulgarian State Radio and Television Female Vocal Choir appears before full houses throughout the country and so does Argentine new tango composer Astor Piazzolla. A well-stocked record store routinely carries dance music from Martinique, Yemenite songs interpreted by Israeli singer Ofra Haza and releases once considered as only of ethnomusicological interest.

This is not necessarily all good news.

Often, we admire these sounds as we trivialize their messages. We dance to the music ignorant of the beliefs or the struggles that shaped it. We create surprising mixes as we slide further into global homogenization. We celebrate these cultures as, perhaps, we harm them.
In part because of the insatiable appetite for “the new” in this culture; in part because communications are making the world smaller at a faster and faster pace; and in part because the diminishing stature of the United States in global affairs is changing the way Americans perceive themselves, we are taking a closer look at the peoples around us.

In particular, in the last few years, major record companies and Anglo pop stars have become increasingly, and more frequently, infatuated with Third World music.
That entertainment corporations may become de facto curators of the music of the world should be a disturbing thought.

Latin American subsidiaries of CBS or Warner-Elektra-Atlantic, for example, control extensive catalogs featuring a wide spectrum of indigenous artists and styles, but what is released here depends on its perceived commercial potential. Smaller companies — such Shanachie, which is devoted to African music — show greater concern, but don’t have the means to compete. Inevitably, these factors shape our images of these cultures. More importantly, failure or success in this market, especially success, has an impact on indigenous music.

European and North American artists reach into Third World cultures for many reasons. And even those who might question the motives and approaches of pop-stars-turned-ersatz-ethnographers would concede that some collaborations and explorations have yielded rich, intriguing results. Paul Simon’s “Graceland” and The Talking Heads’ “Remain In Light,” or the album “Village Life” by pianist and synthesist Herbie Hancock and Gambian kora player Foday Musa Suso come to mind.
But when, as happened recently in a concert at Town Hall in New York City, Brazilian musicians play like American musicians trying to play like Brazilian musicians, are we seeing the future?.

If so, it suggests that the global village is creating its own, imaginary folk music. It has a homogeneous sound. It doesn’t belong to anybody. It doesn’t speak to a Yoruba god, as some drumming from Puerto Rico or Nigeria does, or address the concern of any particular people about any particular problem. It entertains.
In his notes on “Beleza Tropical,” a compilation of Brazilian pop music, David Byrne writes of how “the lightness of much Brazilian pop music is often mistaken or confused for American middle-of-the-road-bland radio ballads. We have come to associate lightness, subtlety, and easy rhythms with shallowness and music without guts.” Yet, he continues, “Some of the artists represented on this compilation were in fact forced into exile from Brazil as a result of sweet-sounding songs like these. It is hard for us to imagine this music as being in any way dangerous, but the military regime that ruled Brazil during the late ’60s and early ’70s found it quite threatening.”
The reasons for this are complex, and Byrne’s comments underline the difficult issue of context and “translating” cultural experiences.

Paul Simon in the first few lines of his song “Gumboots” sings about having a discussion in “a taxi heading downtown,” a friend “who had a little bit of a breakdown” and how “breakdowns come and breakdowns go.” It suggests the neurotic glibness of a Woody Allen character. It suggests a New Yorker’s love song. But Simon also writes in the liner notes that the term Gumboots “is used to describe the type of music favored by miners and railroad workers in South Africa.” It’s an entertaining juxtaposition, but we don’t learn much about what this music means to the laborers or how they use it.
And while many in the United States are troubled by how these foreign cultural expressions are being decontextualized, fragmented and remade into harmless artifacts, what happens in these cultures as a result of the jolt of massive attention?

This, after all, is not a meeting among equals.

After the end of World War II, American pop culture, reflecting the economic and military standing of the United States, became Western Pop Culture. It created its own mythology, reinforced and disseminated by, among others, powerful entertainment corporations, especially in the Third World.
Turning on the radio and listening to Brazilian composer Antonio Carlos Jobim sing in Portuguese may be a matter of choice for someone living in Boston. But Madonna or Michael Jackson are unavoidable in Buenos Aires. And it’s far easier to keep up with the latest releases by REM or 10,000 Maniacs than to find any programs featuring tango or Andean panpipe music from Argentina’s Northwest.

Perhaps some of the enormous vitality and depth of contemporary Cuban music — firmly rooted in Afro-Cuban traditions very much alive in the island today — has a lot to do with decades of a US-imposed blockade. Perhaps the reduced flow of information has been a blessing in disguise.
Also, consider that the US market remains the promised land for performers worldwide. For many of those artists, the impulses, and pressures, to tailor their music to conform to whatever idea North American record company executives or audiences have of, say, Brazilian music or African rhythms can be irresistible.

Ivan Lins, an excellent singer, and composer and a major star in Brazil for more than a decade, has just released his first album recorded in the United States — mostly in English, featuring North American producers, a North American arranger and a host of North American musicians. “Amidst the proliferation of performers whose primary appeal is their ethnicity,” reads his promotional material, “Lins stands out as an artist whose musical roots have sprouted into a sound that belongs to the whole global village.”
No doubt, in some cases, decades of a relentless bombardment of North American values, as well as an eagerness to please and monetary calculations converge without contradiction.
For all we know, Lins sings in English or the Brazilian pop-jazz group Cama de Gato sounds like a West Coast band because they like it that way.

Cross-fertilization is one thing. This is a hall of mirrors. We are looking at reflections of images.
Meanwhile, as identities blur, someone’s culture is being depleted.
None of this is new.

It used to be that a foreign style — rumba or tango, for example — would become fashionable in the United States, run its course as a mass-market product and be replaced by another novelty. But the pace of these encounters was slower and the scale substantially smaller than todays. Both cultures had time to react to the new influences, discarding the superfluous, and absorbing what was judged important. And in these uneven encounters, time is crucial for the economically weaker culture.
Now, as the interest of audiences and the entertainment industry in North America has increased manyfold, so have the speed and variety of the means of communications. Our images of these cultures travel to the sources faster and in more ways than ever. Add to these years of a massive, pervasive presence of North American cultural models and the sum can be overwhelming.

It might have taken decades for a generation of Brazilian musicians weaned on the success of the bossa nova to sound like North American musicians, but the next cycle will be shorter.
More collaborations between Anglo pop artists and Third World musicians are in the works. Paul Simon has been recording in Brazil with local musicians. More releases from around the world are scheduled. PolyGram promises albums by Brazilian singers Caetano Veloso, Beth Carvalho, and Elis Regina, among others.
Perhaps a pause is in order.

Some might think of these rhythms as resources to be utilized, but for these people we barely know, this is the sound of their soul.

This essay appeared in The Boston Globe, April 1989