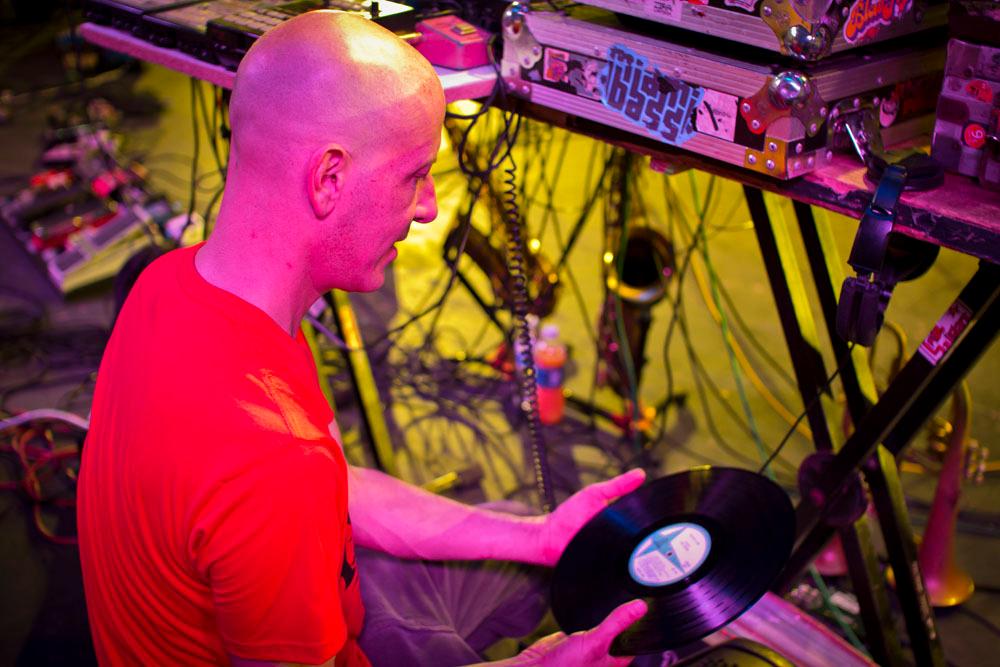 Ask about the Miami Sound to 10 people in South Florida and you’ll get 11 different answers. And yet, for more than 20 years, the Spam Allstars, a group founded and anchored by DJ Le Spam (aka Andrew Yeomanson), has been an unquestionable reference in the Miami music scene. For a city with a notoriously short memory and an insatiable appetite for the latest new shiny thing, it is a remarkable achievement.

The Allstars’ music is an untidy mix of turntable scratches, loops, samples, and spirited live playing. It’s built on driving grooves that draw freely from funk, R&B, and Afro-Latin music, topped by shout-out-loud, jazz-inflected improvisations. And it’s also music that makes its statements subtly, making you move while threading the needle regarding Miami’s music and social history, with echoes of local labels such as Deep City, Saadia Records, and TK, and the layers and layers of sound from the Caribbean and Latin American migrations.

DJ Le Spam and The Spam Allstars are presenting Trans-Oceanic, their new album, 10 years in the making, in a party at the North Beach Bandshell, Saturday, April 29 at 7:00 p.m.

“We had a certain approach, a descarga formula, more or less, and I didn’t want to do the same record again, I wanted to break from that,” says Yeomanson, explaining the time between releases in a conversation at his City of Progress studio in North Miami. “I didn’t want to just keep churning things out. Then the studio got busy and I would get into the different projects that came in and I loved it. I fell in love with the process of recording and producing. It was great, and I really needed to get away from the routines with the band.”

As it turned out, as the studio continued to expand, adding new instruments and recording tools, the practice of working with a wide range of music styles and an ever-changing cast of players, opened for Yeomanson unexpected possibilities.

“I finally got a Hammond B3 [organ] and I couldn’t wait to record with that,” he says, recalling the excitement of the moment. “And when I got a new keyboard I had to get someone to play it and put it on tape. [The music] became more about keyboards and guitar than horns. We didn’t have to have horns in all the songs. But I didn’t have a concept [for the album]. That was something I struggled with a bit, so it was about sound gathering at first, and eventually, I kept stripping things down, more and more.”

As a result, the sound in Trans-Oceanic “has much more space, more clarity in it.” As for the overall concept of the record, the theme became the radio, once the primary tool to find out about the world and discover new music — and part of Yeomanson’s personal story.

Born in Montreal to an English father and Venezuelan mother, he lived in London, Tampa, Bogota, and Toronto before settling in Miami in 1990. It was in Miami where the once self-described “bedroom-guitarist” with minimal performing experience, found an unlikely opportunity with a popular Haitian band, Lavalas. “I’ve always wanted to be in a band, playing out with Lavalas was an amazing experience. That was what got me over a lot of the anxiety I had about performing.”

By 1993, the band was “disintegrating.” It was then that Yeomanson, at the time working at a record shop in downtown Miami and already a serious record collector, met saxophonist Robin Carter who was looking for people with which to jam. By trial and error, at a friend’s studio, Yeomanson began to develop a sound built on pre-recorded material, spoken word bits, loops and live playing. He and Carter became the core of the early Spam Allstars.

But in 1995, the project was put on hold as he joined the backing band of local Cuban-American singer songwriter Nil Lara, who was then developing a national following. By 1998, tired of life on the road, Yeomanson settled back in Miami, where he began working at a pirate radio station. His shows included improvised live performances in the studio by the Allstars, by then a trio. It was, he once said, “the genesis of what I’m doing now.”

In fact, those performances led to Pork Scratchings (1999), the Allstars debut CD, and a brilliant piece of theater-of-the-mind, constructed from samples, loops, found bits, and, oh yes, smart dance grooves. It includes absurdist tracks such as “El Mozambique,” featuring a mocking Fidel Castro impersonator, or “Shiringi shirini,” a collage of snippets of various language recordings, playing all at once. “The way I imagined that song was thinking of me sitting at an international airport listening to all these people around, having their conversations,” he once explained.

The Allstars played around town developing a modest following — but also regularly trying out new material before live audiences. Then in 2001, they got a weekly show at Hoy Como Ayer, a small club in Little Havana. That Thursday-night residency, said Yeomanson, is when “things really clicked and started to evolve quickly.” Word got out and their Thursday night show became a must for locals and tourists. The band and their music, under the label “electronic descarga,” got national attention as the sound of a new Miami in the making. With such success came a fee renegotiation for the band, recalls Yeomanson breaking into a laugh, “and then I could bring more musicians and make it better.” It is an expanded format that he has maintained since, featuring a changing lineup drawn from a solid repertory cast.

Trans-Oceanic looks forward as it glances back.

“The title comes from this model of a Zenith short-wave radio,” Yeomanson says. “When I was 11 or 12 I had a few radios that were from my grandfather and were like my toys and I would take them apart. What I was going to do originally, like I had done in the ¡Fuacata! Live (2002) and the Contra los Robóticos Mutantes (2004) records was to knit something together with bits and pieces that I had recorded from radio over the years. At the end, we didn’t do much with that because of clearance issues, but that’s why we start the record with a snippet of the weather radio.” (Check the title track, “Trans-Oceanic”)

As for the Allstars becoming a Miami institution, Yeomanson’s laughs at the notion.

“I just hope that just as I once discovered TK Records or Deep City Records, one day people will find these artifacts we are creating in a thrift store and say ‘Ah, I see, this goes with this and this and this [that was happening in Miami at the time],’” he says. “maybe I’ll be around to see it, like Willie Clark with his Deep City. For now, I just need to keep working  at it.”