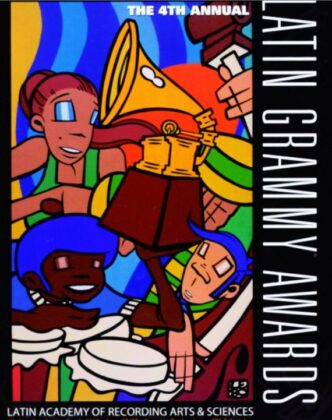 That the fourth ∗ annual Latin GRAMMY Awards are being celebrated in Miami has as much to do with music and business as with spirit. In a town where selling images is a core business, separating hype, wishful thinking and fact are never easy and Miami is young and brash and boastful.
The irony is that the truth may be richer than the myth.
This might be the Northernmost city in Latin America.
It is, for sure, a most American city.

This is the quintessential land-of-opportunity, a place for reinvention, a crossroads for tourists and refugees, adventurers and visionaries, cyberpunks, and nostalgicos. Like the United States itself, it’s a city in a constant state of becoming. It´s a place where without realizing it — often without even meaning to — los Americanos become Latinized and los Latinos Americanized.
It has also a city that has reinvented itself.
The retiree paradise has become a hip, global business hub – and in few areas this is has become more evident than in music, Latin music. In the process, Miami has contributed to change the accents of mainstream popular music in the United States — while influencing popular culture throughout the Americas. As it’s usually the case, these changes were brought about by a combination of political, economic, and social factors — even a TV cop show.
It’s almost 20 years ago now, a lifetime in popular culture, but in September 1984 Miami Vice, a cop n’ dealers series, set in Miami, premiered in network television.
It showed a city both dangerous and hip, an Art Deco-and-palm-trees Casablanca, hot under the sun by day, so cool in blue neon by night.
Suddenly, uncle Leo’s place in Florida looked sexy, mysterious, exotic.
Could it be?
“We take like one-tenth of one percent of the objective reality of Miami and that’s what we render,” said at the time Michael Mann, the series producer, to the Miami Herald. “ What we capture is the spirit.”
In its first year, “Miami Vice” struggled in the ratings, but by its second season, it had captured the imagination of the country.
And as the series was syndicated around the world others became intrigued too, extending the reflections ad infinitum, as if in a hallway of mirrors.
Suddenly, Miami was it.

Everything Miami was cool – including its music, a danceable pop with a certain Latin flavor championed, most notably, by Gloria and Emilio Estefan and their Miami Sound Machine. Successful in Central and South America but unknown in the United States, the group released “Primitive Love” in 1985 and soon had nearly the whole country dancing to “Conga.” It was a breakthrough.
In truth, the Miami Sound had been developed in the 1970s by a group of Miami-based Cuban-born musicians, most notably singer and drummer Carlos Oliva (who produced the first songs recorded by the Miami Sound Machine in the late 70s), singer and songwriter Willy Chirino, and Emilio Estefan.

It was Estefan, who had sharpened his skills in marketing at his “day job” as rum Bacardi’s Latin marketing director, who crossed it over.
For these musicians, the Miami Sound, a fusion of Afro-Cuban music, pop, jazz, and Rhythm & Blues with lyrics in both English and Spanish, was autobiographical and true. In music and words, it told the story of people who had, as Chirino sang in one of his songs, “the heart divided between Tito Puente and the Rolling Stones.”
It also laid the foundation over which artists such as Marc Anthony, Ricky Martin, and Jennifer Lopez would build the “Latin phenomenon” that shook up popular culture in the United States 20 years later.

Back then, however, Miami was not a Latin music center.
In fact, there was another, much more popular “Miami Sound,” in the late 1970s, cooked up in the TK Studios, in Hialeah, just minutes from downtown Miami.
It was a distinct brand of R&B, brash, catchy, and upbeat, that fed on and fueled the disco rage and made international stars out of resident musicians such K.C. Harry Wayne Casey and the Sunshine Band, George, and Gwen McRae and Betty Wright.

Meanwhile, Miami was a recording destination. Rock and soul artists such as Eric Clapton (who recorded “Layla” at the old Criteria Studios in North Miami Beach), James Brown (who did “I Feel Good” there), The Bee Gees (“Saturday Night Fever”), Aretha Franklin (“Don’t play that song”) and The Allman Brothers (“Idlewith South”), ), to name just a few, were regularly coming to work and play in the area.

Energized by the attention and the hits, by the 1990s Miami had become a player in the recording industry.
For Latin music and artists, it became a kind of one-stop-shop.
Almost unnoticed, Miami had become a Spanish language media hub.
There are several print publications – including a major daily newspaper and, yes, Spanish-language very own national tabloid – print correspondents, radio, internet, and, perhaps most important, television.

Telemundo and Univision, the two major Spanish language networks, are based in the Greater Miami area. An appearance in Sabado Gigante or Cristina, shows taped and broadcast out of the Univision studios in Hialeah, or in a program on  HTV, GEMS or MTV Latino could put a Latin artist instantly in front of an audience of millions, including the fans back home.
So suddenly, a Latin artist could record and mix in Miami (working in his or her own language if he or she so desired) and take care of his business affairs. All major labels have either the U.S. or the regional offices here, often both; many independent labels, several music rights societies, and top entertainment law firms have opened offices in the area. And then, they could start promoting the new record with a local, national, and even global reach.

As Miami became a place to record, more studio work was available and that, in turn, enticed more and more musicians, arrangers, engineers, and producers to move here from all over Latin America and the Caribbean. Add to this the weather, the geography – Miami, as if you need a reminder, is just a few hours from some of the great capitals of Latin America – and the result is that many of the top Latin artists and producers have settled in Miami, full or part-time, from Julio Iglesias, Ricky Martin, Carlos Vives and Kike Santander to Raul Di Blasio, Raphael, Shakira, Rudy Perez, Bebu Silvetti, Cristian and Jose Jose.

Meanwhile, the sound of Miami, like the city itself, has become richer, more complex, more diverse, harder to define.
Here we cross borders and turn into explorers, interpreters, and translators as a matter of course, every day, many times a day.
Sometimes it’s out necessity. Often, it’s just for the sheer pleasure of it.
Here we redraw our maps over and over.
Here there is always someone arriving. Here there is always someone making something completely new out of commonplaces.
Here we have our past close by and leave our future open.
And it’s all in the music.
You can hear it in an old-fashioned bolero and in a track of vallenato-ska, a rap-son tune, an album of mariachi pop, or a burst of rock en español.

It´s the sound of where we are coming from, who we are, and what we can be.

And that’s certainly worth a Latin GRAMMY celebration.

This essay was actually written for the 2nd Annual Latin Grammy Awards in 2001. The event had to be moved to Los Angeles  “Due to serious concerns for the safety and dignity of our 10,000 guests, nominees, performers and sponsors from across the globe, and the threat of disruption during the telecast itself, the Latin Academy, along with CBS and Cossette Productions, has been forced to make a very difficult and unfortunate decision — to move the 2nd Annual Latin GRAMMY Awards show from Miami to the Great Western Forum in Los Angeles on September 11.”

The show was postponed due to the terrorist attack of September 11, 2001. The winners of the Second Annual Latin Grammy Awards were announced during a press conference on Tuesday, October 30, 2001, at the Conga Room in Los Angeles, California.