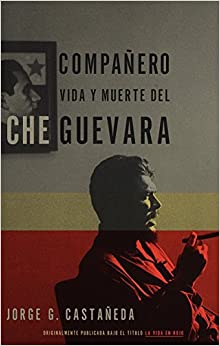 Compañero: The life and death of Che Guevara

Ernesto “Che” Guevara was executed on October 9, 1967, by the Bolivian army, after a brief, disastrous guerrilla campaign. It was only the last in a string of failures. Yet the fascination with Guevara has remained strong if at times disconcerting, ranging as it has from posters tacked on college dorms’ walls and harebrained, deadly revolutionary schemes to become the image of choice in the sales pitch for racing skis.

The spell also has produced a small library worth of books – few of them as astute and sober as Compañero: The life and death of Che Guevara by Mexican political scientist Jorge G. Castañeda.

Neither hagiography nor a diatribe, fastidiously documented, it sets Guevara in context, including the mind-boggling, near theological, factional disputes in the communist camp in general and the Latin American left in particular, while offering intriguing insights into what shaped his character – most notably his struggle with asthma.

In his prologue, Castañeda establishes that “the emblematic impact of Ernesto Guevara is inconceivable without its dimension of sacrifice: a man who has everything – power, glory, family, and comfort – renounces it for an idea, and does so without anger and reservation.”

And yet, “His relevance does not stem from his work or ideas but from an almost perfect identification with a historical period.” In fact, writes Castañeda, what makes him an icon is “an almost mystical affinity with his era.”

It wasn’t just a consonance of certain political and social concerns, he argues, but the fact that “If anyone ever believed that wanting the world was enough to have it and have it now, that was Che Guevara. If there was ever a time when millions thought the same thing, it as the sixties.”

It is the Che of the beret and long hair in the famous photograph by Korda, “gaze fixed upon a distant horizon,…, face clear against an open sky,” equal parts revolutionary, rock star and religious figure. The Che who dies young.

But the Che of Castañeda is also stubborn, intransigent, and suffering of a blinding willfulness that eventually, despite a capacity for lucid analysis, leads him to his death. More troubling, wishful thinking and poorly understood lessons led Guevara to deeply flawed conclusions that were to have a deadly effect for others, especially in Latin America.

His Guerrilla Warfare, drawn from his experience in Cuba, became a manual for revolution. “It taught that in order to win one must dare to try; and in order to dare one must have faith,” writes Casta¤eda. “Che endowed two generations of people with the tools of that faith and the fervor of that conviction. But he must be also held responsible for the wasted blood and lives that decimated those generations.”

Slow at times as it wades through the details of economic arguments and the minutiae of political intrigues, Compañero often reads like a gripping tale of a man bent on martyrdom.

It follows Ernesto Guevara de la Serna, born to a blue blood family in Argentina, as it slowly develops his social and political outlook through his travels throughout Latin America, his witnessing the United States-backed overthrow of a reformist government in Guatemala, his growing interest in Marxism and, finally, his meeting of Fidel Castro in Mexico in 1955. In fact, Guevara comes across as far more radical than Castro although, Castañeda argues, “to attribute Fidel’s presumed gradual shift from democrat to hardline Marxist-Leninist to the Argentine Communist’s influence is absurd.”

What does emerge from Castañeda’s portrait however is that Guevara gave an epic character to what was set to be just another Latin American revolution. Castro never talked about world revolution or creating the new man, Guevara did.

But after a ruinous stint as head of Cuba’s central bank and minister of economy and growing clashes with the Soviet Union, just as Cuba was becoming increasingly dependant on its goodwill, Guevara became a liability for the revolution.