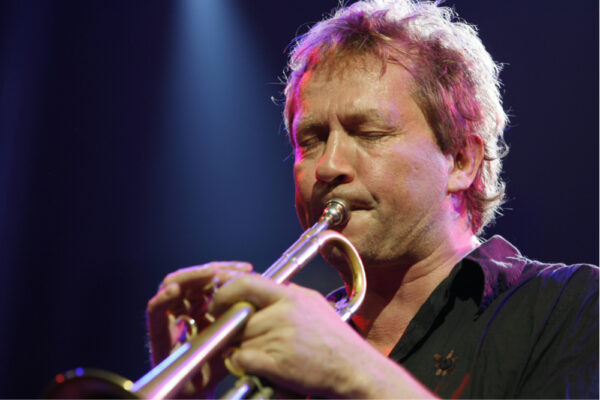 The music of Nils Petter Molvær is the sound of paradox. It’s the sound of “Solid Ether,” a track from the Norwegian trumpeter, composer, and producer’s recently released CD, An American Compilation (Thirsty Ear). In fact, “Solid Ether” could serve as a manifesto on Molvær’s musical philosophy: delicate melodies floating over brutal, industrial rhythms; breathy, asymmetrical trumpet phrases flowing over clockwork-exact percussion loops; hints of folk music mixed with whirring, burping noises of technology. For all of this meticulous intellectual scaffolding, the result suggests electro-tribal dance music.

“For me, it’s all about contrasts,” Molvær explains during a phone interview from Oslo, Norway. “It’s working with extremes. When I play the trumpet, it has to have an organic, natural feel. And for there to be a contrast, there has to be a cold or chilled-out landscape from a sampler or synthesizer or something of this kind.”

In Europe, Molvær has seven CDs under his own name, two of them collections of remixes of some of his pieces by deejays and producers such as Deathprod and Bill Laswell. Two early Molvær discs on ECM are still available in the States, and this year, the independent Thirsty Ear label has released: An American Compilation, Streamer a collection of live recordings, and er, which catches up American audiences with Molvaer’s most recent production. The latter two were both licensed from Molvær’s own Sula label.

In An American Compilation, the trumpeter, who personally selected the tracks, chose to introduce himself with a mix of both studio and live performances. In part, that decision had to do with the peculiar logic of the music business. His first two discs, Khmer (1997) and Solid Ether (2000), both on ECM, are only represented obliquely on An American Compilation. “I don’t want to pay a label to use my own music,” says Molvær dryly. Consequently, tracks such as “Solid Ether,” “Kakonita,” and “Vilderness,” all from Solid Ether, appear in live versions rather than as original studio recordings. But, as it turns out, this decision also works well artistically as it offers first-time listeners a glimpse of Molvær live — which is not quite what most people would expect.

Electronica, a product of studio manipulation, can have a hi-tech-hothouse feel that doesn’t translate well to the stage. But in concert, Molvær and his band — which includes a guitarist, a bassist, a drummer, a deejay, and other button-pushing wizards — have both the hard punch of an industrial-rock band and the subtlety and interplay of a jazz group. Those qualities come through loud and clear on Streamer, a collection of live performances recorded in 2002 at “Jazz Happening” in Tampere, Finland, and at the Marquee Club, in London, England.

Molvær’s writing offers surprises as well. Some pieces play like wordless avant-pop songs (“Vilderness,” “Water,” and “Frozen”); others, like “Only These Things Count,” actually have vocals; while yet others suggest some sort of sound sculpture, such as the ominous “Tabula Rasa.”

“In my band, I think like a vocalist,” says Molvær. “I’m the melodic instrument, and the singing quality [in the trumpet playing] for me is very, very important. So, yes, some of the pieces are like songs, some even have vocals. But for me, it’s still about playing the contrasts — for example, my melodies against noise.”

The mix of references, elements, and approaches in his music can be confounding, but Molvær lives it naturally. “I’m really open to whatever comes, and I think it’s part of growing up with all kinds of music. For me, it comes down to either I like it or I don’t.”

Molvær was born in Sula, a small island off the coast of Norway, in 1960. Improbably, his early musical influences include Dixieland and heavy metal, Herb Alpert, Buddy Rich, and Bitches’ Brew.

“My father was a jazz musician,” he explains. “He played saxophone and clarinet in a more traditional, New Orleans-style jazz band. Actually, I think [his group] was the first Norwegian band to be invited to play at the New Orleans Jazz and Heritage Festival in the 1970s.”

Not surprisingly, Molvær heard plenty of jazz at home. “Yes, of course, all kinds of jazz recordings,” he recalls. “Ella Fitzgerald, Miles, Coltrane, Mulligan, Zoot Sims — all kinds.” That’s what he heard, but, he adds, “I was into Led Zeppelin and Black Sabbath.”

Molvær tried his hand at several instruments including bass, drums, and keyboards before settling on the trumpet. He remembers, “I was a huge fan of Herb Alpert and the Tijuana Brass when I was 9 years old.” He also recalls “playing to death” an album of the Buddy Rich Big Band’s greatest hits. But the shock of discovery came a little later, when he first heard Birth of the Cool. “That was incredible for me,” Molvær says. “All those lines going on at the same time. And then I heard Bitches’ Brew. I was older, maybe 12, 13. And then I got into the jazz-rock stuff.”

He left Sula in 1979 to attend the conservatory in Trondheim, Norway’s second-largest city. Eventually moving to Oslo, he expanded his vocabulary, playing in big-band and theater-pit orchestras, as well as in shows with Elvin Jones, George Russell, and bassist Gary Peacock. In 1982, he joined Masqualero, a quintet led by bassist Arild Andersen that featured drummer Jon Christensen (perhaps best-known to American audiences for his work with pianist Keith Jarrett and guitarist Ralph Towner). Molvær remained with the group for 13 years, appearing on three discs by Masqualero for ECM. During that time, he also began to incorporate Norwegian folk music into his vocabulary (“Yes, I discovered the blues of my country,” he says with a chuckle.), as well as the work of American trumpeter Jon Hassell and British producer and mastermind Brian Eno — which proved a pivotal influence.

“As a trumpeter,” he recalls. “I went through all these phases: Miles, Freddie Hubbard, Woody Shaw. And then at one point I asked myself: ‘What do I want to sound like? What do I want to be?’ I was getting a little tired of the trumpet. I was fighting it too much. I wanted it to be something that it wasn’t.
“And then I heard [Hassell and Eno’s]Fourth World, Vol. 1: Possible Musics (EG, 1980) and it was like, ‘Wow!’ At the time I was listening to flute music from Asia, and when I heard this, it opened everything up. Actually, it stopped me from quitting the trumpet. It made me play trumpet again. It made me think that I shouldn’t fight it, that I should try to find a sound I’m comfortable with.”

He mentions the impact made by musicians such as Andersen, Christensen, saxophonist Jan Garbarek, and guitarist Terje Rypdal on the Norwegian scene. “I’m not quite sure what’s going on, but there is an emphasis on improvised, jazz-like music in Norway lately.” Others have noticed as well.
A feature in the British newspaper The Guardian last December headlined “Norwegian Blues,” called Oslo the new capital of jazz. In the article, producer Rune Kristofferson, who owns the adventurous Rune Grammofon label, noted: “The most characteristic thing about these Norwegian musicians is their disrespect for the genre. It’s about people from jazz and more hard-core improvisational music and from electronic music and rock playing with musicians from other fields and trying to create something that’s not very identifiable. The academies in Trondheim and Oslo have been important in that respect, encouraging musicians to step outside their own fields and experiment in ways that help them find their own voices.”

Kristofferson was speaking generally but could have been talking about Molvær specifically. Moreover, and like many European players of his generation, the trumpeter doesn’t try to imitate American jazz or emulate its icons, but, rather, uses jazz as a sort of toolbox from which he picks and chooses different tools and strategies to operate on his chosen musical sources.
“I’m greatly inspired by American musicians,” he says. “But there is something wrong when someone says ‘If you don’t play like this, it’s not jazz’ or ‘It’s not worth anything.’ When certain American musicians come out and take this posture, for me, it becomes a political thing. Who are you to decide what’s what?
“Improvised music has existed for, oh, I don’t know, 40,000 years before America was discovered,” he continues. “Improvisation is an old practice. And you don’t have to improvise on standard tunes, you don’t have to improvise on music from a certain period. You can improvise on many things, and I improvise over what I feel comfortable with and can relate to in my world. It goes to my identity as a human being. In that sense, the way I play is related to who I am — and that’s not so much in the Afro-American-jazz vein, even though I enjoy listening to it. But that’s not who I am.

“I really never think if what I do is jazz. Sometimes I think what I do is not jazz. But sometimes people experience it as jazz, and I can’t take away their experience. But for some, it’s more of a mixture of contemporary music. For me, when I think about jazz, I think John Coltrane, Charlie Parker, Miles, Wayne Shorter, Kenny Dorham, Chet Baker. Keith Jarrett is jazz, Shirley Horn is jazz — the masters. But what a Garbarek does, for me, is more of urban-world music, global music. And that’s the world I’m in. You borrow things from everywhere. Like the Gotan Project mixing tango and techno. It’s not quite tango and it’s not quite techno. It’s like people: We are a mixture of so many things.”