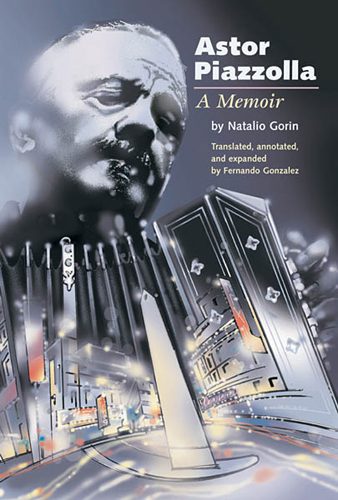 Astor Piazzolla, brilliant, iconoclastic tango musician, and composer, has become a national hero in Argentina and a cult figure for classical and jazz lovers worldwide, but only after a lifetime of controversy and struggle. The outspoken, headstrong Piazzolla told his story to a journalist and longtime fan Natalio Gorin in the spring of 1990 in a series of frank interviews.

An impressive contribution to Music History studies. Superbly translated, annotated, and expanded by Fernando Gonzalez (who as a music critic for The Miami Herald and The Boston Globe reported extensively on Astor Piazzolla’s career), Astor Piazzolla.
By Midwest Book Review (Oregon, WI USA)

From Astor Piazzolla A Memoir.

Translating Natalio Gorín’s Astor Piazzolla: A Memoir was a challenge I did not relish. Being true to the spirit of the word is difficult enough in any translation, but Gorín’s book often suggested a conversation between two educated and streetwise, passionate tangueros.Good luck.
But that, of course, is one of the very elements that make this book special.
If I took on the challenge was because, as a porteño and longtime Piazzolla fan, I felt that providing an accessible social and musical context for English-speaking readers was crucial to an appreciation of Piazzolla, his music, his struggle, and Natalio Gorín´s work.
I did not wish to create a tango encyclopedia in the footnotes and drown the book´s voices in numbing detail. The appendix entitled “Piazzolla´s Musicians and Singers” provides basic information about the artists called upon by Piazzolla over the years.
Other figures, such as singer and songwriter Carlos Gardel or bandoneonist and bandleader Aníbal Troilo, have been dealt with in greater detail because of their historical importance and their role in Piazzolla´s life. My hope, in all cases, has been to be unobtrusive while helping the reader along and to provide enough information to pique his or her interest in a more personal search. An advantage of globalization is that nowadays, some of the recordings by the tango artists mentioned in this book are widely available, and I trust that when you find them, you will not be disappointed.