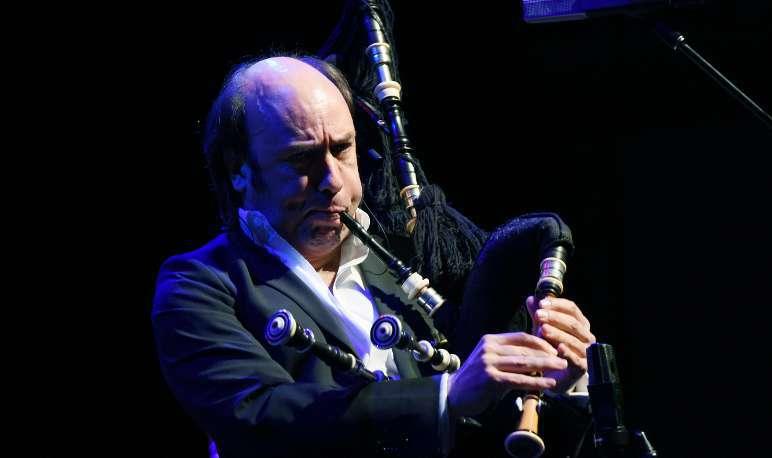 There is more to Carlos Nuñez than being “the Jimi Hendrix of the bagpipes,” or the “the 7th Chieftain,” making him an honorary member of the legendary traditional Irish band.
But if you happen to be the modern master of the gaita, the bagpipe of Galicia, a region in the Northwest corner of Spain, maybe such barker’s calls help make new audiences stop and look.
The truth is richer.

Nuñez is a classically trained multi-instrumentalist. (He also plays flutes, recorders, whistles, and a number of traditional instruments). And he is both a traditionalist and an innovator, and as such he has played a key role in preserving the gaita, an instrument that is a symbol of Galician culture yet was once fading to extinction. Moreover, casting a wide net, his collaborations speak to the extraordinary universality of this instrument and the possibilities for its future. Over the years Nuñez has collaborated not only with artists such as The Chieftains, Ry Cooder, and Compay Segundo, but also Mike Scott of The Waterboys and Japanese composer Ryuichi Sakamoto; flamenco guitarists, and Sufi singers from Tangier.  A Irmandade Das Estrelas (The Brotherhood of Stars), his 1996 debut recording which became an improbable platinum seller in Spain, featured more than 50 guests.

“Collaborations are my modus operandi,” says Nuñez who begins his new North American tour at the Coral Gables Congregational Church, Wednesday. “It´s a philosophy that comes from traditional music — especially Celtic music. We don’t have that sense of the author, alone with his creation. Instead, in traditional music, the idea is that music is a collective creation. “
It’s also a way of doing things that, he says, has allowed him “to learn a lot.”

“Galician music is a music of ida y vuelta (literally, roundtrip) with Latin America just as Irish and Scottish music have it with North America,” he explains. “ And for me, through these collaborations, I’ve been able to reconnect those magical threads.”
For Nuñez clearly this is not just an intellectual exercise or a professional strategy. This is also personal.

He was born in Vigo, the exit port for so many Galician emigrants who came to the Americas, one of which was his grandfather. And as curious as they sometimes sound, these connections often speak of how culture travels, how it’s absorbed, re-interpreted and re-signified.
He once noted that the impact of the Galician presence in Mexico was such that some Mexican-American audiences thought “A Rianxeira,” an old Galician non-religious song to the Virgin of Guadalupe, was actually Mexican. (Nuñez ended up recording it under the name “Guadalupe” with Linda Ronstadt and Los Lobos). Or that in doing his research he found out that the bagpipe was the first European instrument heard in Brazil and its sound can still be heard in the music of Brazil’s northeast.
Conversely, Nuñez says that when he started playing he would talk with the old gaiteros (gaita players) of Vigo. “And they would tell you that  … in the 1930s they had actually heard Mexican music and Cuban son played in gaitas. And that’s why the drumming in Vigo has a tumbao [a Cuban swing] It’s not like the Irish or Scots would play it. It’s the ida y vuelta, brought back by the immigrants.”

Nuñez and his quartet, featuring Stephanie Cadman on violin, vocals, and step-dancing; Pancho Alvarez on viola (“Not the typical Spanish guitar but an instrument that comes from the time of the troubadours. We actually found it in Brazil,” says Nuñez) and his brother Xurxo Nuñez on percussion, will be presenting music from his new album Inter-Celtic, which explores the different expressions of Celtic music in Galicia, Ireland, Scotland, and Brittany.

“The great Scottish scholars determined that the bagpipes arrived in Scotland from Galicia, by the Atlantic corridor,” explains Nuñez. “Before there were roads, there were highways of the seas and there was a corridor for commerce in the Atlantic. The Scottish bagpipes and the [Irish] Uilleann pipes are descendants of the ancient Galician pipes, which we received from Mediterranean and Eastern cultures hundreds and hundreds of years ago.”
“The ancient Lebor Gabala Erenn [ perhaps better known as The Book of Invasions] written by monks, tells the story of Ireland and talks of the coming of the Milesians [Iberian Celts],” said Nuñez. “When the Irish were conquered by the British many escaped to Spain and from the days of Philip II and Charles V, the kings of Spain gave Spanish nationality to the Irish because they were considered Galicians. I remember joking with the President of Ireland [Michael D. Higgins] who is also a poet and came to one of our concerts: ‘Anything but being British, eh?’.”

And Wednesday’s concert will also feature local guests.
“We have invited the gaiteros of Miami,” he says. “In every city in the United States there are pipe bands. De know there is one here. The Coast Guard has one. There are also Galician gaiteros. We are always recruiting players. I think people enjoy it and for me it’s a reminder of that great day when The Chieftains invited onstage and gave a chance.”

He was just four years old in 1975, when the death of Dictator Francisco Franco opened an extraordinary period of democratization and with it a reassessment of regional and national identities. As a symbol of Galician identity, the gaita had been repressed by Franco, himself a Galician. Flamenco was promoted by the central government as the music of Spain. Nuñez, who started playing the gaita in 1979, found himself “in an explosion to reaffirm everything that had been forbidden and suppressed. There was this incredible energy all around and a cry: ‘Hey! We exist! We are not dead.’ To be a gaitero was not just being a musician. We had a mission. We went around elementary schools, middle schools, universities to make sure the gaita would not die.”
“Today we have more than 15,000 pipers,” he says proudly. “Y have fantastic students, both men, and women. The gaita, our music tradition, our language will not be lost. Now we are in the next step: to explore the Galician connections with all those places around the world where we Galicians have traveled to for centuries.”

He was performing at Brittany’s Festival InterCeltique when he first heard The Chieftains. He was 1. Their paths have been intertwined since.
While elsewhere many of his generation arrived at roots music after exploring rock, Nuñez took the inverse path, discovering rock in 1994, when he was invited by The Chieftains to join them at a concert in Carnegie Hall celebrating the birthday of Roger Daltrey of The Who.
It was his debut in the United States.

“So there I was with Roger Daltrey, Alice Cooper, Pearl Jam, The Spin Doctors, Sinead O´Connor — and I was happy because I was with my idols, The Chieftains.  I had no idea who these other guys were,” he says. “That’s when I discovered rock. And the beautiful thing since is that my relationship with American rockers has been always as peers, as traditional musicians raised and educated in different traditions. For them, that’s their natural music. For me, it’s Galician music. ”

This feature appeared in The Miami Herald