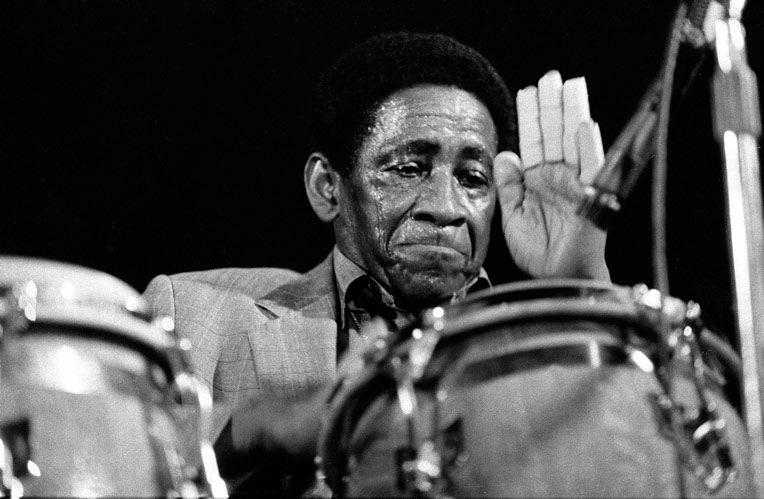 Master conguero, bandleader, and composer Ramón “Mongo” Santamaría died February 1st at Baptist Hospital in Miami. He had been in life support after a stroke. He was 85.
A mailman in his youth in Havana, Cuba, Santamaría went on to become, for the next 60 years, one of the most influential musicians in Afro-Cuban music in the United States.
Some of his achievements can be easily accounted for.
His career includes stints with Perez Prado, Tito Puente, and Cal Tjader, an extraordinary run as bandleader nurturing talents such as Chick Corea, Herbie Hancock, Hubert Laws, Sonny Fortune, Marty Sheller, Luis “Perico” Ortiz, and the fabled singer La Lupe to name a few, a top ten Latin crossover pop hit (his version of Hancock’s “Watermelon Man” in 1963) and even a jazz standard (his 1959 “Afro-Blue,” made famous by John Coltrane).

But Santamaría, a man with a luminous smile and an easy-going, unassuming demeanor, made many notable contributions. Some of them, by now long part of the standard musical landscape, are taken for granted.

“He was a tremendous bongocero and he applied a lot of the vocabulary of the bongos to the congas,” says drummer, bandleader, and educator Bobby Sanabria, who was a member of Santamaría’s band in the 1980s. “So he played what we call el repicando, el floreo, the conversational aspect of the bongo-playing to the congas. He liberated the conga drums in that it was not just an instrument for keeping time but conversing.”

He was an exceptional player with a distinct sound. His dry-sounding slap was unmistakable. “He used to say it had to sound like a gunshot,” recalled Sanabria. “And it did. I played next to him and it got me every time.”
“The licks that Mongo played are seared in my head — and in the head of every drummer who plays Cuban music,” says Sanabria. “He had power, endurance, and finesse and provided an archetype for the people who followed him to model themselves after. There is something of Mongo in all of us who play this music.”

Nat Chediak, a producer and author of the “Diccionario de Jazz Latino,” (SGAE, 1998) credits Santamaría with putting the congas in pop music in the US. “After the success of  ‘Watermelon Man’ … the bulk of the recordings for Columbia were covers of the top 40 hits of the time – and congas became a staple of pop.”

And Santamaría, caught between the end of the big band era and the rise of rock, is also credited with establishing the now standard small big band format in Latin jazz  – rhythm section and three-horn section. This was the lineup that recorded “Watermelon Man.”
But Santamaría, best known for his jazz and pop work, was also a knowledgeable traditionalist and a champion of Afro-Cuban culture.

His pan-African-rooted, Cuban-R& B-funk fusion might have laid the foundation for artists such as Carlos Santana — but Santamaría also recorded the first album of traditional Afro-Cuban drumming in the United States (the groundbreaking “Chango” in 1955, reissued as “Drums and Chants,” later followed by albums such as “Yambú,” “Mongo,” “Our Man in Havana” and “Up From the Roots”) and brought traditional Afro-Cuban instruments into jazz.

“After I finished interviewing him for the dictionary, I asked him if there was anything he wanted to make sure it was included,” recalled Chediak. “And he said ’Yes, please mention somewhere that I was the first to put the chekere (a beaded gourd) and the batás (a two-headed, hourglass-shaped drum) in jazz. Because if I read again that [Cuban fusion group] Irakere was the first to do it in the 70s, 20 years after I did it, it’s gonna give me something’.”

He did it all with deep-rooted knowledge, power, and grace, and did it so well for so long that his work became part of the sound of the world around us to the point of becoming invisible as if it always had been there. It had not.
It took Mongo Santamaría.

Credit where credit is due, maestro.