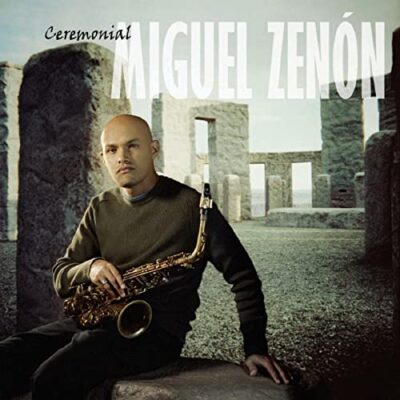 Miguel Zenón plays who he is.

Born in a tough, poor neighborhood in Santurce, Puerto Rico in a non-musical family, Zenón, 27, grew up surrounded by the sound of salsa and traditional bomba y plena, got a classical music education, discovered jazz on the radio with Charlie Parker and the Machito Orchestra playing “Mango Mangue” and while, as a kid, “music was nothing special,” he eventually forwent a career in engineering (“I love math and science”) to take a chance on what has become his dream: “making a living with my playing.”

He went on to study at Berklee College of Music in Boston and the Manhattan School of Music in New York City and did his postgraduate work on stages and studios around New York, working with the best of a young generation of Latin American musicians that is redefining Latin jazz, artists such as Panamanian pianist Danilo Pérez, Puerto Rican saxophonist David Sánchez, Argentine pianist, and arranger Guillermo Klein, and Puerto Rican trombonist William Cepeda.

It’s no surprise then, that this is not the old Latin jazz of jazz-standard-with-congas. Instead in Ceremonial, Zenón´s debut disc for Marsalis Music, his references include Cuban singer-songwriter Silvio Rodríguez and Gahanian rhythms; church hymns and Impressionist harmonies, rhythm changes and Tibetan chants.

He has a taut sound on the saxophone and his music suggests both passion and purpose, deep lyricism, and a clear-eyed design.

His reading of Rodríguez “Leyenda” establishes his focus on this disc: “playing melody, expressing myself with a sax like a singer with his voice.” The title track draws from several West African sources. “I had the chance to visit West Africa this past summer,” recalls Zenón. “And I was able to see the incredible connection between the Caribbean, the Black music of Latin America and where musicians are still playing the countries we visited. I would play them Puerto Rican rhythms and they would immediately relate it to something they’d play.”.

“Transfiguration,” featuring Brazilian vocalist Luciana Souza, sounds ethereal and easy on the year, yet it’s constructed around a mathematical formula and shifts meters nearly in every bar. The rockish “Mega” builds on a rhythmic idea played by the drums; “A Reminder of Us,” dedicated to his girlfriend, Elga, pays tribute to Maurice Ravel and Claude Debussy; “440,” which alludes to the 440 Hertz, the frequency of the note “A,” is a study on harmonics; while “Ya” is Zenón´s self-assigned “attempt at writing a piece with the rhythm changes.”.

And just like he bookended Looking Forward, his 2002 debut recording, with spiritual meditations — “Prayer # 1 (Blessing) and “Prayer # 2” (Thanksgiving) — he closes Ceremonial with a heartfelt reading of the hymn “Great is Thy Faithfulness.”.

“I’m a religious person and I tried to have my music reflect my beliefs,” he explains. “This is a hymn that I learned in Spanish and we sang at church when I was a kid. I truly believe that any chance they get to express my music is a gift from God, so I think of this piece as a small offering.”.

Zenón doesn’t wear his Latinidad on his sleeve. He knows who he is. He doesn’t need reminders. And, one would hope, neither does anyone else. Rather, think of his music as 21st-century jazz: a fully bilingual, product of a global culture in which notions of what is local have long been blurred. Picking which piece is which out of the whole is beside the point.

This is true, lived-in fusion. One person’s story. He just happens to be from Santurce.

“On my first record, I wanted to show certain influences and emphasize the rhythms of Puerto Rico,” says Zenón. “But in this disc, we are dealing with a different kind of fusion of jazz and Latin music. I’m interested in my roots, but there are so many other things I like, so many other things I’m listening to, so many things I’m trying to learn, and I want to create music that expresses me fully.”.