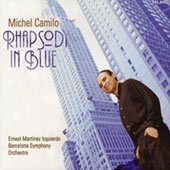 No one would seriously argue that a musician has to be born in Vienna to play Mozart. Still, having a Latin-Caribbean pianist, and one best known as a jazz virtuoso, play symphonic Gershwin may raise a few eyebrows.

Yet, on a closer examination, Michel Camilo turns out to be singularly qualified.

Like George Gershwin before him, Camilo is an irrepressible New World Romantic. Both his music and his playing are open-faced, generous, and ambitious, full of energy and brash optimism.

Like Gershwin, Camilo tells in his work a distinctly American tale.

Born Jacob Gershovitz, Gershwin was a first-generation American, the second of four children born to Russian immigrant parents. Growing up, he absorbed the sounds around him—from ragtime and Tin Pan Alley to blues, jazz, klezmer, and classical music—and, in time, distilled them into a music that stands as the soundtrack of  New York in the first half of the 20th century.

Camilo, born in the Dominican Republic, was a child prodigy, who, at 16, became a member of the National Symphony Orchestra. Yet at 24, he left it all to take his chances in New York. He became just another music student, another anonymous rehearsal pianist by day, and a hopeful jazz musician by night. Four years later, the group Manhattan Transfer won a Grammy for their vocal version of  “Why Not?” one of Camilo’s compositions. It was his big break. Two years later, he debuted in Carnegie Hall with his own trio. In 1988 he made his major-label debut —and he was off, an adult prodigy now.

And like Gershwin, Camilo has zigged and zagged in his musical life between Broadway and pop music, film soundtracks, classical music, and of course, jazz, while taking the stage at different times as a player, bandleader, composer, and conductor.

Not surprisingly, he says he has “always admired Gershwin.”

“He was a great pianist and a very curious person, very restless,” Camilo says. “And, what’s most important for me, he was fearless. He wasn’t afraid to go into all these different musical worlds and take chances—and he excelled in all of them.

“He was always challenging himself,” Camilo continues. “He didn’t just stay in his safety zone but kept growing, and that’s my philosophy. It’s right there, from the beginning: ‘Why Not?’.”

By his own calculations, he has played these works in concert nearly a dozen times, but this is his first recording of them.

“All these years have been a preparation for me, and there’s been a deepening of my understanding not only of these works in particular but of Gershwin.”

His maturation as a player and his grasp of Gershwin’s language are both evident in his performances here with the Barcelona Symphony Orchestra (Orquestra Simfònica de Barcelona i Nacional de Catalunya), conducted by Ernest Martinez Izquierdo.

In “Rhapsody in Blue,” which Gershwin premiered himself at Paul Whiteman’s historic “An Experiment in Modern Music” concert on February 12, 1924, Camilo brings to bear not only his command of the classical and jazz vocabulary but also his big sound, his flair for drama, and his sense of humor. Also, while this is a subsequent version for symphony orchestra written by Whiteman’s arranger Ferde Grofé, for his piano parts Camilo has chosen mostly to use Gershwin’s original solo piano phrase and accent markings—which, he notes, often calls for a “jazzy” approach.

“As I see it, we need to think of ‘Rhapsody in Blue’ more from jazz than a classical perspective,” he says. “Rather than Liszt, we need to think of the music Gershwin was hearing at the time: Charleston, ragtime, blues. The original solo version was much more in the spirit of the times, the 1920s. And then we must also remember that Gershwin largely improvised the piano part at the premiere.”

Written only a year after “Rhapsody in Blue,” his first attempt at an extended work, “Concerto in F,” shows Gershwin’s remarkable growth in such a short time, something evident in a much greater sense of form and development. (He also did his own orchestration.)

For some of his critics, this growth came at a price. In a piece for the New York Herald Tribune included in Robert Wyatt and John Andrew Johnson’s “The George Gershwin Reader,”  Lawrence Gillman lamented that “in achieving respectability he has also achieved tameness and conventionality.”  While in a review for the New York World, critic Samuel Chotzinoff called Gershwin “a genius”—before noting that “He is not a master of the form, he is audaciously irresponsible and writes down, apparently whatever he feels, indiscriminately.” Still, he spoke for many Americans when he added: “He alone actually expresses us.” And the “audacity” and “impertinence” that Chotzinoff also heard in Gershwin’s music is brought forth here by Camilo with the joy and commitment of a believer.

“The ‘Concerto in F’ is one of Gershwin’s most misunderstood works. It has to swing. And as a pianist, you have to dig in,” he says. “You have to play Gershwin with determination.” Camilo was a percussionist with the National Symphony Orchestra in the Dominican Republic, but occasionally  he was called on to play the piano, and he is fond of recalling how conductors  would demand that he “‘play out more,  articulate more,’ so I could be heard over the orchestra.” Here, his experience as a percussionist, his ability to muscle the sound of his piano over a symphonic orchestra, and, according to Camilo, his Caribbean heritage, all come into play.

Gershwin was an exceptional melodist, but his “Concerto in F” is driven by rhythm. He set the tone in the opening bars by turning the orchestra, in Camilo’s apt description, “into a giant drum set.” The first movement is based on the Charleston, a dance in vogue in the 1920s, and it swings. In the blues-based second movement, Gershwin turns introspective before setting up a series of grand, dramatic gestures by both the piano and the orchestra. The third movement, actually based on his fourth prelude for piano solo, works as a sort of grand recapitulation. It bursts with nervous energy and Camilo shades his playing subtly, sounding by turns urgent, playful, muscular, and casually virtuosic.

In “Prelude Number 2, ” originally titled “Blue Lullaby,” Gershwin achieves a delicate balance between the translucence of impressionistic sonorities and the grit of the blues. Camilo takes the piece at a slower tempo than Gershwin did in his own recording. He plays here with a sure-handed but delicate touch as he takes some liberties, opening the piece up to improvisation.

“It was my one chance in this performance,” Camilo he says. “But the challenge was to not go too far and do it in context, à la Gershwin, accounting for his style, the period when he wrote it, and the music he might have been listening to at the time.”

It’s a streetwise approach to Gershwin’s work—respectful but not reverential, exact but also swinging, classical in form but jazz in spirit—that would have done Gershwin proud.