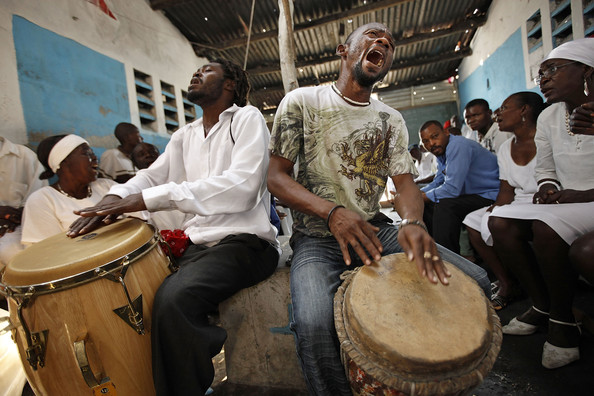 Haitian drummers in performance in Miami

Music is not a universal language. It cannot be.
We might be the same under the skin, but the fact is, we sound different — and we should. Music is about a specific experience of life.
It expresses someone’s ideas of beauty and truth, shaped by history and geography, economy and religious beliefs, race and technology — played out in song. Words and rhythms are documents. More often than not, they are the sound of a people speaking to themselves, passing on news, pleading to the spirits, lamenting love lost, having a good time.
Enjoying the Rev. James Cleveland might not necessarily bring you closer to Pakistani devotional Sufi singer Nusrat Fateh Ali Khan — not any more than knowing Mozart’s Don Giovanni might prepare you for Chinese opera.

The differences are subtler, but no less deep, among the music and cultures in South Florida. In many instances, there is a shared African root, and the different expressions suggest a common language spoken in dialects. Other times, the connections are tenuous.
Much of this was played out, often literally, at the drumming jam sessions staged throughout Miami as part of the research that composer Tania León, choreographer Bebe Miller, and videographer Philip Mallory Jones are conducting for Drummin’, a multimedia piece commissioned by the Miami Light Project in collaboration with Miami-Dade Community College, Wolfson Campus, the New World Symphony, and Arizona State University.
Cafe Nostalgia, in Little Havana, held the opening session last Thursday night; the African Heritage Cultural Arts Center followed with the African/African American jam session last Friday; Tobacco Road rocked with
Brazilian drumming Saturday and Tap Tap Restaurant, in Miami Beach, hosted the Haitian jam Sunday. Two sessions remain, one focused on the Caribbean Basin tonight and a Peruvian jam Saturday afternoon.

Musically, these were remarkable events — messy, often maddingly uneven but also full of wonder. Even days later, some images and sounds remain: the exceptional playing of bata drummer Lazaro Alfonso, earthy and transcendent, getting dancers testifyin’ on the floor while making everyone forget the heat and impossibly close quarters; the spirited Drums ‘n Unity Posse, a djembe (African drum) mother-and-sons ensemble led by Altine Baki; the subtle, mesmerizing Steve Reich-goes-to-Rio grooves of an impromptu Brazilian jam; the performance of Haitian drummers Ti Wouj, Ton-Ton, and Miguel, playing variations with the muscle of a road crew and the elegance and precision of a chamber group. But music was only part of it.
With every encounter came the realization that these are our neighbors.
How come we haven’t met before? And just how many cities is  Miami? This can be an unsettling place. We draw boundaries by day that blur by night. We discard rules as soon as we agree to them. Even the familiar takes on an odd feeling. But if you have an open mind and a working heart, life here can be extraordinarily rewarding. This is not the stuff of tourist brochures; this is about reality and what we make of it.

I took pleasure in watching the faces in the crowd. I chuckled when someone called for a djembe and half a dozen materialized from under tables and chairs. I mean, does every household in Miami have one? And I was moved by the dignity and pride etched in the faces of the old drummers, some of them perhaps enjoying the first recognition outside their communities.
Opportunistic, mealy-mouthed platitudes about diversity might have numbed us to the idea. Still, there’s an extraordinary undiscovered culture all around us — hidden in plain sight.
The point is not that we are all alike and if all goes well we’ll hold hands and sing “We Are The World.” The point is precisely the opposite.
We are all different, perhaps profoundly different, and because of it, we might actually have valuable things to teach each other — if only once in a while we make the effort, cross the borders of our fears and just shut up and listen.

This story was published in the Miami Herald, September 1996