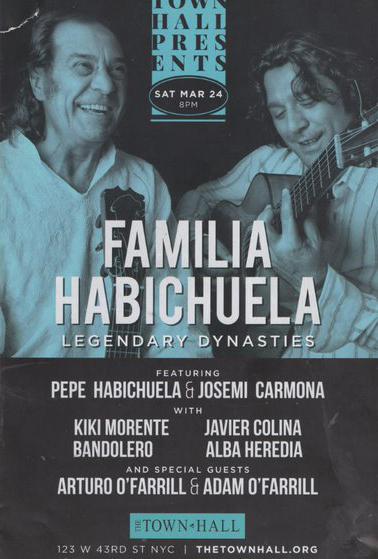 Flamenco guitarist Pepe Habichuela, 73, is the rarest kind of master. Yes, he’s an invaluable link to the history and deepest traditions in the music, but he´s also a seemingly fearless experimenter and a champion of the younger musicians following on his steps.

He is celebrating his 60 years of flamenco guitar with a concert titled Familia Habichuela: Legendary Dynasties at The Town Hall, Saturday, March 24 at 8:00 pm. Habichuela becomes part of a long list of great flamenco guitarists who have appeared at The Town Hall in the last 20 years, including Paco de Lucia, Vicente Amigo, Tomatito, Paco Peña, and Sabicas.
The concert, part of Flamenco Festival New York 2018, will also feature his son, guitarist, composer and producer Josemi Carmona, a member of the groundbreaking Nuevo Flamenco group Ketama, and singer Kiki Morente, the son of the late, great singer Enrique Morente, whom Habichuela accompanied for more than 30 years. The superb ensemble also includes Javier Colina, one of the finest bass players in Spain; José Manuel Ruiz, “Bandolero,” a top percussionist in flamenco; and flamenco dancer Alba Heredia, a member of the Maya family, another storied flamenco gypsy dynasty.
Also, as a nod to Habichuela’s history of collaborations with jazz musicians, the show will also feature multiple Grammy-winning pianist and composer Arturo O’Farrill, leader of the Afro Latin Jazz Orchestra, and his son, trumpeter and composer Adam O’Farrill.

Born José Antonio Carmona Carmona in Granada, Andalucía, Spain, Pepe Habichuela (the nickname, Habichuela, green bean, is a family mark that has been passed on down from his grandfather) is the patriarch of one of the most influential Gypsy dynasties in flamenco.

“One says ‘60 years’ very quickly, but that’s many, many hours playing guitar,” said Habichuela with a chuckle in a recent conversation from his home in Madrid, Spain. His career as a musician started simply as a way to help put food on the family´s table. He was 12 when he asked his father for a guitar and started to try his luck in the caves of the traditional neighborhood of Sacromonte. In time, he became a disciple of master flamenco guitarists such as Mario Escudero and Agustín Castellón Campos, “Sabicas,” and distilled their teachings and his own experiences into a distinctive style, defined by its intensity, clarity and earthy elegance.

Pepe was only 18 when his brother Juan, who was leaving for New York on tour, summoned him to Madrid to replace him at his job at Torres Bermejas, one of the best tablaos (flamenco clubs) in the capital city. Habichuela didn’t even have a suitcase. “My mother put a pair of pants, a tortilla, and a piece of bread in a bag, and off I went to Madrid.” It was while performing there that Habichuela was noticed by Enrique Morente, beginning a rich musical partnership. In Morente, Habichuela found a kindred spirit, an artist at once rooted in tradition and always ready to take chances.

He recorded with Morente, and then solo, but also performed with artists such as cornetist Don Cherry, Anglo- Indian musician, producer, and composer Nitin Sawhney and sitar player and composer Anoushka Shankar and recorded albums such as Yerbaguena, an exceptional collaboration with The Bollywood Strings, an Indian string orchestra; and Hands, with jazz bassist Dave Holland.

Habichuela’s son, José Miguel (Josemi) Carmona, whom flamenco virtuoso Paco de Lucía called “one of the guitarists who will define guitar playing in the 21st century,” was 5 years old when he debuted on stage with Morente, and as a teenager, he toured with his father on the landmark Broadway revue “Flamenco Puro.” At 14, he joined his cousins’ group, Ketama playing a blend of flamenco, salsa, Brazilian grooves, and jazz harmonies, all presented with a smart pop sensibility. Ketama became a phenomenon, launching what came to be known as New Flamenco.

It is only natural then that Habichuela and Josemi Carmona take their appearance at The Town Hall as an opportunity to cross boundaries, sharing the stage with O’Farrill and his son Adam, a trumpeter and composer.
Fittingly, the O’Farrills represent yet another musical dynasty. Arturo’s father, Arturo “Chico” O’Farrill (1921-2001), was one of the most accomplished composers, arrangers, and bandleaders in the history of Afro-Cuban jazz. Arturo Jr., who began his professional career as the pianist on composer Carla Bley’s band, is a multiple GRAMMY winner who, through his work with his Afro-Latin Jazz Orchestra, has explored the great diversity within what is called Latin jazz. Meanwhile, Adam O´Farrill has established himself as an up-and-coming trumpeter and composer, recording two albums with the O’Farrill Brothers Band, also featuring his brother drummer and composer Zack, and collaborating with artists such as saxophonist Rudresh Mahanthappa, pianist Vijay Iyer and bassist Christian McBride.

For Habichuela, “to be on tour with Josemi and Kiki, to play with young flamencos, it’s wonderful. I’m living a second youth,” he says with a chuckle. “I’ve played with all the old masters you can think of in the flamenco world, and now the young people are calling me to play with them, and to tell you the truth, I feel younger than my age. I’m always surrounded by young people and that fills me up with life.”