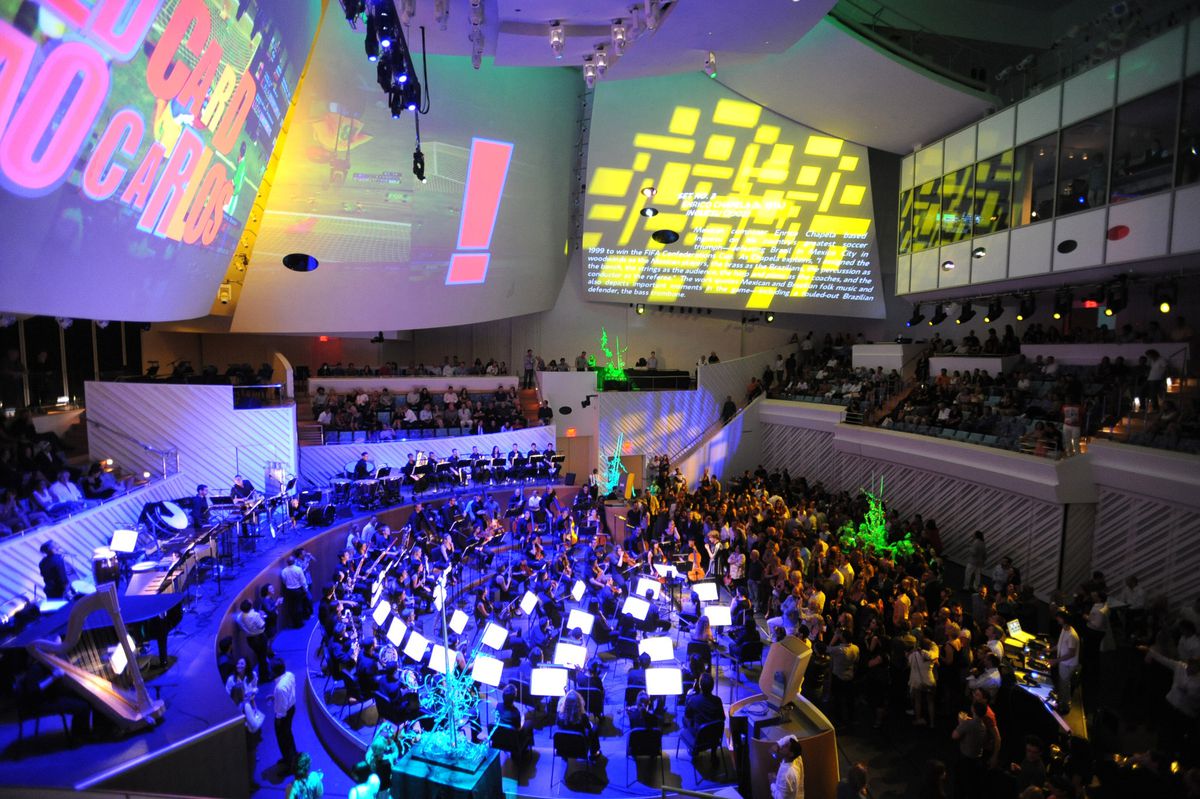 Think of the city as an orchestra – a rhythm section of cars and buses; the brass sounds of a factory; the emotions played out by a string section, told in the sounds of water; a choir of voices, perhaps in many different languages, all at once, telling stories.

In Miami, we live surrounded by those sounds. Project 305, an ambitious multimedia piece involving the New World Symphony, MIT Media Lab and Knight Foundation, will translate these kinds of Miami sounds and sights into a symphonic work. Miami residents will be able to submit both audio and video clips through a new mobile and web app now available. The clips will become the source material for both the musical piece and accompanying video.

Composer Ted Hearne, filmmaker Jonathan David Kane and MIT composer, inventor and educator Tod Machover, a co-founder of MIT’s Media Lab and a consultant in this project, will work with New World Symphony Artistic Director and co-founder Michael Tilson Thomas, who will be responsible for the overall artistic direction of the Knight-funded work.

Project 305 from Knight Foundation on Vimeo.

The sounds and images will be collected now through May 12, 2017. The new work will premiere on Oct. 21, 2017 at the New World Center, followed by performances in communities and neighborhoods throughout Miami.

“Music is about community and is about connecting people,” said Machover in a presentation at the New World Symphony to launch the project.“ In our fractured culture, now more than ever, [music] is one of the most powerful tools we have…. And besides connecting people, what is particularly important now is to set up models of collaboration of people working together as equals.”

Howard Herring, president and CEO of New World Symphony, noted that this project forwards the organization’s mission to “redefine, reaffirm and express and share [classical music’s] traditions with as many people as possible.”

Project 305, he said, goes even beyond that goal, he said. “Our impulse to share usually means a passive participation of the audience. That’s going to be way different here. This is all about the active, purposeful, in the moment expression on the part of thousands of people. And all is going to come together in a piece of art.”

Balancing the documentary and artistic aspects is a defining challenge of this piece, says Hearne.

Project 305 is a sociological [piece], and definitely documentary in nature,” Hearne said. “Jon Kane and I hope to document the voices and perspectives of individual Miamians from around the city … as they show us what they hear in their own curated experience of the city. But also, my job is to use this documentary project as the seeds of material for a work of art… and that work will inevitably express my personal interpretation of the material we capture, and will hopefully push the audience into the realm of something much less fixed and specific than a documentary.

For Kane, an independent filmmaker, member of Miami’s Borscht Corporation film collective, who was born and raised in Miami, Project 305 has a personal resonance.

My perspective of what Miami identity is comes from how I was raised, from where I come from,” he said. “What is so fascinating for me about this project is being able to reach beyond my personal experiences and understand and experience the city through these other perspectives.” The final product, he expects, is “this Miami narrative and this Miami identity created through the eyes of the community.”

Machover developed the idea of a city symphony three years ago, after the Toronto Symphony Orchestra commissioned a new work from him. “So I went back and I told them that I loved to do a portrait of Toronto,” he said. “Let’s use music to show what Toronto is like. Let’s listen to the city and incorporate that into the piece. But I also said ‘Let’s do it in such a way that it’s not just my piece, but that it is made by anybody in Toronto who wants to participate.’”

Symphony in D from Knight Foundation on Vimeo.

The effort’s artistic and social success led Machover to take the concept to other cities including Perth, Australia; Edinburgh, Scotland and Lucerne, Switzerland. Meanwhile, Dennis Scholl, at the time VP/arts for Knight Foundation, heard about city symphonies, attended the presentation in Edinburgh in 2013, and proposed to bring it to the United States. As a result, Knight Foundation has funded Machover to help develop city symphony projects in Detroit, Michigan (“Symphony in D,” which premiered in November, 2015); Akron, Ohio (where composer Clint Needham worked with the Akron Symphony on the “Sounds of Akron: City Meets Symphony,” which premiered in April 2016); and is now working on Miami’s Project 305 and, at the same time, Philadelphia.

“Something that I’ve learned doing this is that you have no idea of what is out there,” said Machover. “The interesting thing is to come across some core feelings or ideas that resonate with people across the board.

“The most recent project we did was in Detroit,” he said. “And it was one of the most moving projects I ever did because Detroit is a place that really has a story to tell, [but is] a place where the community is very fractured geographically. So this was something for people to come together and think about their city.”

He spoke of how, at one point, “a group of seniors from around town [residents of American House, an assisted-living development] got together and said ‘We like to represent the sounds of Detroit that are gone … because the city has really changed.’ So they went to the archives and came up with the 20 most iconic sounds that were gone, and it was so moving.”

Thus, the more than 15,000 sounds that were collected got to include Henry Ford’s first engine, the sound of Grand Prix cars, the implosion of the old Hudson’s department store downtown, as well as bits of performances by street musicians, a child’s music practice session as well as pieces composed by kids at the Detroit Academy of Arts and Sciences and Crescendo Detroit, with Hyperscore software,“ which allows for music to be made from scratch with lines and color.”

“The point is to bring people together,” said Machover. “In each place [the process] has been different … but it will turn [the collected sounds] into an orchestral score presumably including electronic sounds.”

Many of the details about how the music composition and the video will coalesce into a piece have yet to be defined. Kane and Hearne have never worked on a crowdsourced project. “I expect it might be a bit overwhelming,” Kane said with a chuckle. “But I’m really hoping that the city takes ownership of the piece and we, as the artists, can act as a conduit for the expression of this city. This is not about our concept of the identity of Miami but [about] allowing Miami to work through us in creating its own expression of itself.”

This story was posted on the Knight Foundation blog, January, 2017