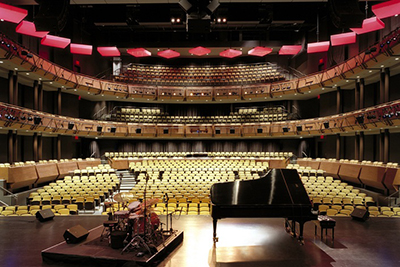 Proclaiming the death of jazz every so often has been, well, a jazz tradition. It has been part of the ritual of renewal that is at the heart of the music. Now jazz seems to be in its best shape in decades and no one talks about death. Carnegie Hall has added a jazz season, Lincoln Center has made jazz part of its regular programming, the Lincoln Center Jazz Orchestra, featuring Wynton Marsalis, recently passed through Boston playing Duke Ellington’s music, and even The Smithsonian has organized a repertory orchestra. And last year, the Lila Wallace Foundation granted $3.4 million to fund a national jazz network, the largest grant ever for jazz. But the renewal has stopped.

Few would argue against listening to old charts by Fletcher Henderson or Duke Ellington played live again. But this kind of embrace from the cultural establishment should give jazz fans pause.

Those who think that validation for jazz meant reaching equal status with the European classical tradition may celebrate these developments as major achievements. But it sounds a bit like Paul Whiteman making “an honest woman out of jazz” all over again — and more than 60 years later it is still a bankrupt notion.
Far more troubling, the institutionalization of jazz suggests that, as an aesthetic challenge and form of cultural resistance, jazz may no longer be relevant.

This music was once a thorn in the side of the cultural establishment.
Its subtle mix of spur-of-the-moment improvisation, highly formalized structures, and rigorous canons made sophisticated intellectual and aesthetic demands. But jazz was also popular music, depending on jukeboxes and dance halls, living by the rules of the marketplace. And it was black.
European classical music was also once the domain of improviser-composers. But economic, social, and technological changes slowly turned it into a written tradition dominated by composer-theoreticians and repertory orchestras.

Now the process that turned concert houses into living museums and composers into conservatory professors and grant-writers has arrived; indeed it has been welcomed to jazz. This is not necessarily good news.
For all the evils, real and perceived, of the marketplace, musicians in jazz have created and worked at their craft while attending to the changing tastes of their audience. In turn, the music resonated with the times. One need not romanticize smoky basements, long sets for small pay, sleazy club owners, inattentive, talkative audiences or the noises of the cash register to acknowledge that Louis Armstrong, entertainer, and artist, set the tenets of the music while playing in gambling riverboat s, dance halls and speakeasies in Chicago. Or that Duke Ellington wrote some of his masterpieces while playing for dancers at the Cotton Club.

The tension between entertainment and art — or that created by art disguised as entertainment — is at the heart of jazz. Jazz set intellectual and emotional demands to a streetwise pulse. This was sophisticated, demanding popular music.

Despite what some might think, not all expressions of popular culture eventually want to “grow up” to mimic European culture. Try as you may, concert halls are clearly not appropriate for all styles of jazz.

What jazz has always deserved is a new way of listening — this is, after all, the music of the New World — not some sort of accommodation with obsolete categories and standards.
Perhaps it was inevitable. The economic and technological changes of the last 50 years have been dramatic. And the social underpinnings of jazz have been whitened nearly out of existence.
In part because of its creative energy, in part because of demands of the marketplace for a new product, jazz compressed in less than a century the evolutionary process — from folk music to atonalism — that took European classical music hundreds of years.

Musically for jazz, there now appears to be little more than a formal reworking of past styles and reinterpretations of old masters’ work. What once produced jolts and sparks — the rhythmic innovations in the zigzagging runs of Charlie Parker; the cool glow of Gil Evans’ orchestrations for Miles Davis’ nonet, the furious probing of John Coltrane — has ossified into a set of rules, patterns, techniques. So besides the commercially successful but numbingly vapid variations of pop-jazz fusion and “smooth jazz,” the major strain in contemporary jazz is the neoclassical movement spearheaded by Wynton Marsalis.

But much promoted musicians such as guitarist Mark Whitfield, trumpeter Marlon Jordan, saxophonist Christopher Hollyday, and pianist Benny Green, to name a few, are toothless young lions. They are technically proficient, some times even brilliant, but, perforce, they lack the urgency, creative spark, and insights of the originals: Wes Montgomery, Clifford Brown, Jackie McLean, Wynton Kelly. This is inevitable. The world that challenged and nurtured those old masters to produce their music is gone.ar gestures by major jazz musicians aware of a need to reconnect the music with the culture that once informed it. There are some young artists — Steve Coleman, Ed Wilkerson Jr., each in his own distinct approach — who have understood the signals and know both their jazz history and the rhythms of the street. One thing seems certain, if there are some Charlie Parkers and Duke Ellingtons around they are not looking back, trying to be Parkers and Ellingtons.

Meanwhile, will an audience of music curators and institutional patrons, with the freedom to ignore current tastes, narrow the gap between jazz artists and listeners? Will it reenergize the music?

Jazz once illuminated musical traditions from odd angles, challenging, offending, thumbing its nose at convention. But that was then. When we now see jazz recognized as an art form, indeed as worthy and deserving as European classical music, perhaps it says more about the exhaustion of contemporary jazz than about some sudden enlightenment of official culture.

The sound of Duke Ellington in some music museum is not a celebration of jazz, it’s an obituary.

This essay first appeared in The Boston Globe, November 1992