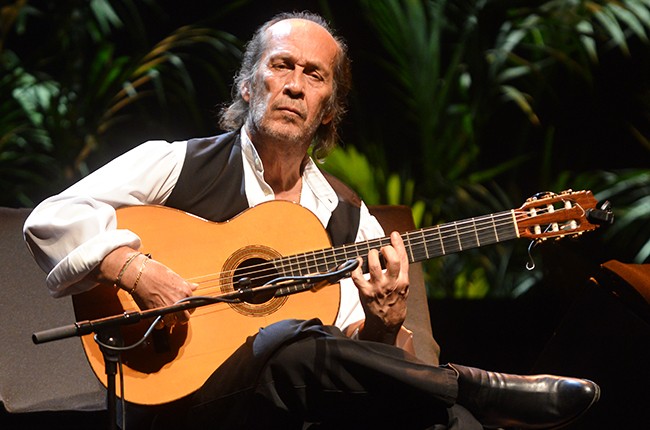 The subway line that passes by where I’m staying in Madrid begins (or ends, it depends) at Paco de Lucía station. It’s a new extension and the place was going to be called something else. But then the extraordinary flamenco guitarist and composer died and when the station opened in March 2015, it carried his name.
As it turns out, in a used book stand in the Cuesta de Moyano, this weekend, I found “Paco de Lucía El Hijo de La Portuguesa” by Juan José Téllez, a close, intimate bio by a friend.
Some of Paco´s quotes should be in a textbook for young musicians: “I’m always very open, in general, to criticism. In fact, I like negative criticism more than I like the favorable one because I’m used to compliments and adulation. When I see a bad review I’m interested in what they are saying and finding what I can get from it.” And before latching on to any tradition, they might do well in considering Paco’s warning: “If you anchor yourself in the past, each day you’re dying a bit more.”
Music is such a mysterious art.
We can hear 10 guys playing guitar fast, cleanly, and with great flair, yet that one,  sounds different. Then, later, we learn that Francisco Sánchez Gomes, best known as Paco de Lucía, read three books a week (from Dickens to Murakami to Perez- Galdós, says his son Curro), loved movies — Hitchcock, John Ford but especially Billy Wilder — and had marathon weekends of Spanish film. In the book, a friend calls him “un revolucionario conservador,” which might translate as “a revolutionary conservative” or, perhaps, “a conservative revolutionary,” which is not the same thing.

Either way, it´s an apt description to set the beginning (or the end, it depends) of a full, creative life.