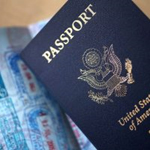 I filled out the applications, got my picture taken, sent the money order, got a letter with the appointment date, waited in line, had my name called, did the interview, went home and forgot about it. Time passed, got a note in the mail, went to the Knight Center, waited in line, heard the speeches, followed the instructions, and left a citizen.

After almost 20 years of living in the United States, there had been no one thing, no bolt of lightning, no life-changing insight that had finally pushed me to it. It was something else, probably much more mundane and profound.
I had come to Miami to be a foreigner, not a citizen.
I had left Argentina in my 20s with no interest in looking back. The country of my childhood had become a nation of enemies. In Boston I didn’t know anybody, couldn’t figure out why people did what they did, didn’t understand the language, and yet I felt safe, at ease. Not recognizing the people you grew up with, becoming a stranger in your own neighborhood, fearing that which had been familiar yesterday — all that my life in Argentina had become — that was hard.
Boston was easy.
It was supposed to be baffling. I was a foreigner. I came as a student and, little by little, without realizing it, I also became an immigrant. I got a job at a Burger King, learned the language, went to music school, put together a band, wrote my first film scores, and through no brilliant scheme on my part, stumbled into an improbable new career. I became a professional outsider — a writer.

In less than a decade, I went from subversive in Buenos Aires to exotic in Boston. I settled in new routines and did the grown-up thing — I got married and divorced. I had an accent but, under the right light and from a certain distance, I could pass for a native. After all, I did live through the blizzard of ’78, my first snow, and graduated to excruciating spectator pain as a member of the Red Sox Nation. I spent Saturday mornings going through the bins at Stereo Jack’s, a used-record shop where they knew their jazz, always had an opinion, and couldn’t wait to tell you about it. I griped about the gentrification of Inman Square and mourned the closing of The 1369 Jazz Club — neighborhood dive, haven, and confessional.
I was born into Buenos Aires. I earned my Boston.
I never thought about becoming a citizen. Not once.

I lived in the in-between, defined for what I was not — not really an Argentine, clearly not an American — rather than for what I was. I was my own interpreter and translator and never thought of this as something special. It was just the way it was. Then things changed.

I got a little recognition in my job, a new girlfriend, my own home for the first time. The better my life got, the worse I felt. I had never thought much about belonging, but the more of a Bostonian I became, under the right light and from a certain distance, the more of an outsider I felt. It turned out the limits of translating are not words, but memories.

I had learned the language; I had little to remember in American. My memories were of a country of one — far from Argentina, not quite in the United States — and I felt at home only around others who lived in countries of one. With Maure, who was South African, Isabel, who was born in Chile, or Laurent, who had come from Haiti, we stumbled with English and accents, but we spoke a language of in-between.

I thought about American cities made of countries of one. Los Angeles was, well, too West Coast. New York was old and settled in its ways. Miami was intriguing but problematic. It was young and closer to South America — but it also had the kind of self-appointed Inquisitors I had hoped to never deal with again. But then I had a chance to come and took it.
My Boston friends were dismayed. I was abandoning civilization. Most were sure I was escaping the snow, the darkness in February, the pipes freezing, and flooding the basement. It had to be the weather. I told them that’s what it was. The truth is, I hate the heat and the humidity. I actually like the cold. Almost four years later, I still miss the smell of the fall.
But now, while I still live and die with the New England Patriots (I mostly die), I no longer have to explain un cortadito or live without sobremesas. I’ve learned to dance tango and appreciate the untranslatable differences between love and amor. I’ve found a good Spanish bookstore with a know-it-all attendant, and spend most Saturday mornings going through the bins at the Blue Note record shop, taking lessons on gospel and R&B from people who really know their stuff and can’t wait to tell you about it.

I’m not sure how it happened: There was no bolt of lightning, no life-changing insight; it was more like life — an imperceptible accumulation of small decisions, and banal, unmemorable moments. Perhaps it was because here, the mundane is as exotic and as ordinary as I am. Whatever it was, I never could have imagined that of all things, in this place of tourists and refugees, scam artists and visionaries, cyberpunks and nostálgicos, I would find a home and come to think of myself American.

This essay appeared in the Miami Herald Sunday Magazine, June 1997