The six-day event featured dance (including an evening of free tango lessons in Lincoln Road, Miami Beach); orchestral and chamber music concerts; a film series exploring tango on film and an exhibit comprising Astor Piazzolla’s scores, including the original score for “Libertango,” and the original arrangement of “Triunfal,” personal objects, and his bandoneon, all lent to the New World Symphony by Piazzolla’s daughter Diana and son, Daniel.

The original score of “Libertango,” recorded at Mondial Studio, Milan in 1974 with a group of Italian studio musicians. It became a breakthrough piece for Piazzolla in Europe. It later became a hit for dance music diva Grace Jones as “I’ll Never See His Face Again.” 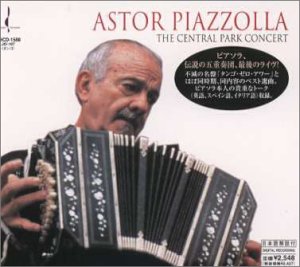 The bandoneon that the Piazzolla family lent for the exhibit was the one he used in his historic concert at Central Park, New York City.