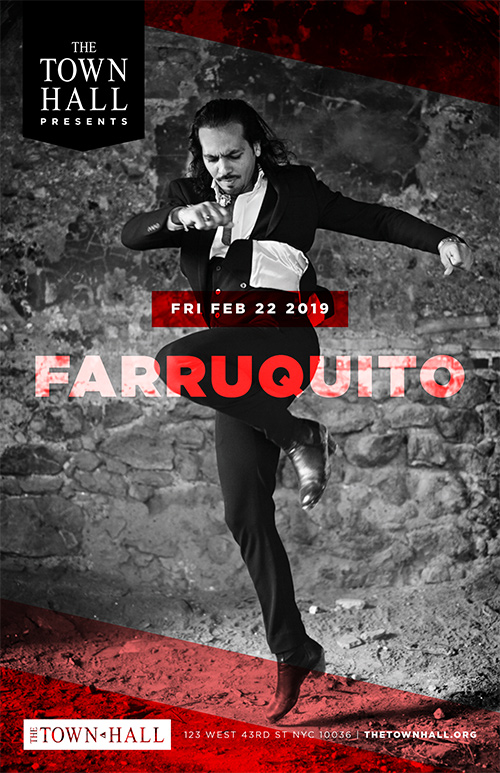 Juan Manuel Fernández Montoya, Farruquito, has been on stage since he was a child.
Born into one of the great dynasties of flamenco, he was 5 years old when from the wings he watched his father, his mother, an aunt, and his legendary grandfather, the great dancer “El Farruco,” perform in Flamenco Puro, (1986) a show that brought flamenco to Broadway. Years later he would talk, still excited, about how he would join some times in the final number.

Since, Farruquito has seemingly enjoyed his greatest triumphs and endured some of his darkest moments under the glare of the public eye — but now, he suggests, you’ll get to actually know him.

In his new show, simply titled “Farruquito,” notably the first time one of his productions carries his name, he is not just the dazzling center of the show but its very subject.

“Farruquito” is his first major tour of the United States.

“ It’s a summation of the most important moments in my career, the moments that have taught me the most, only that I’m revisiting them with the perspective of how I feel and who I am today,” he noted in a recent conversation. It’s a perspective that also suggests a personal affirmation before the imposing memory of his grandfather, the legendary Antonio Montoya Flores, “El Farruco,” a self-taught dancer who went on to become the most influential flamenco figures of his era.

“Many people know the story of my family, and the story of my grandfather, El Farruco,” he said.  “So some think that watching me dance, will be like watching my grandfather dance again. And that´s why I start [in silhouette] dancing my grandfather’s soleá [one of the classic forms in flamenco], and then I go on stage and do my own version, so people understand that I have my own way of doing things. That’s why I’ve written all the music and the song lyrics of this show and why I dance more freely than ever before: Because I feel I am myself onstage, more fully than ever before.”

That danced conversation, between Farruquito and his grandfather, transcending time and even death, suggests a personal twist on the long-running tension in flamenco between innovation and tradition.

“Why do some people associate the essential with the old?” asks Farruquito, whom The New York Times called “one of the greatest flamenco dancers of the new century.” “An essence doesn’t have anything to do with old age or with tradition. An essence is one’s truth. It’s something that doesn’t happen in other genres, but in flamenco, ‘pure flamenco’ is a synonym of old, traditional, and basic. Why? [A way to perform] flamenco might be modern and be pure. Purity has to do with the artist’s feelings and how he expresses them.”

Some of the influences in his music are common references in modern flamenco such as guitarist Paco de Lucia, singer Camarón de la Isla or the flamenco-blues band Pata Negra but, he adds, “as a kid, I grew up not only listening to Michael Jackson, a personal favorite, but also Aretha Franklin, Nat King Cole, Ray Charles, and so many others, and of course I bring their music to flamenco because that’s what I feel, that’s my territory.”

His has been an extraordinary career, distinguished by artistic excellence and achievement — but also scarred by unimaginable tragedy.

He presented his first show at a Madrid theater when he was 8 years old. He was 11 when he appeared on a video of the great flamenco singer Camarón de la Isla; and at 13, he appeared on Carlos Saura’s documentary Flamenco dancing with his grandfather.  It was a scene that suggested a meeting of flamenco’s history and its future.

But just two years later, in 1997, El Farruco unexpectedly died. At 15, Farruquito found himself the repository of not only a dance tradition but his grandfather’s legacy. The future was now. Then, in 2001, adding to the family’s woes and his personal burden, Farruquito’s father, the cantaor Juan Fernández Flores, “El Moreno,” died of a heart attack on stage, in Farruquito’s arms, during a performance in Buenos Aires, Argentina.

Some of these events are portrayed on the show – the family around the kitchen table, a performance at the tablao, a pause for romance — and there’s a striking scene, featuring Farruquito and two other male dancers holding canes, charged with tension.

“That represents the moment after Farruco was gone, and my father was gone, and I became the head of the family,” he said somberly. “So I call on the other men in my family, my uncles, my brothers, my cousin, and together we weather the storm that is tormenting us. At one point it looks like, out of desperation, we are going to fight each other, but that’s not the case. What we do is actually to come together. We wanted to take care of the family, fight for the family.”

In “Farruquito,” Juan Manuel Fernández Montoya reaffirms his place as prince and patriarch of the dynasty, embracing the tradition as he continues to reshape it.