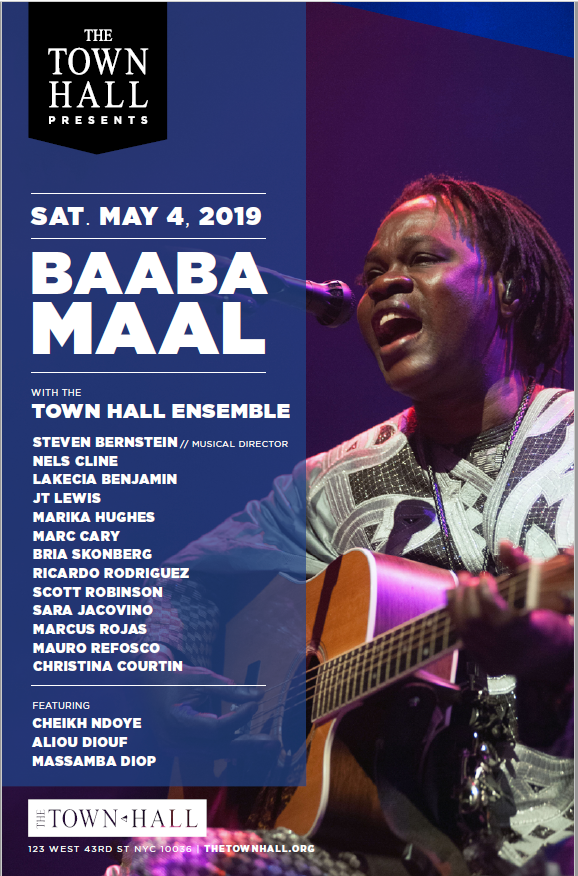 While American audiences have heard him recently  — his voice soaring in the Academy Award-winning soundtrack of Black Panther by Swedish composer Ludwig Göransson — this will be Maal’s first performance in New York City in 8 years.

For the event, he will be accompanied by the Town Hall Ensemble directed by trumpeter, composer, arranger, and bandleader Steve Bernstein, augmented by members of Maal’s own band on African percussion and bass.
“I am very excited to be performing with the Town Hall Ensemble,” said Maal, discussing the one-of-a-kind program. “I love the energy that comes with a large band such as this. The mix of different instruments and styles of playing gives me a lot of freedom to experiment. I won’t say anything else now because it’s going to be a surprise!”

For Bernstein, whose ductility as a writer and player has led to collaborations with artists as disparate as Phish’s vocalist and guitarist Trey Anastasio, trombonist Roswell Rudd and The Band’s late drummer Levon Helm, collaborating with Maal “is an incredible opportunity.”
He muses about translating the sound of the traditional kora, the delicate 21-string lute from West Africa, to horns; having a Brazilian percussionist as part of the ensemble, “giving a different flavor to the music,” or expanding on Maal’s horn section sound (“It has a lot of salsa feeling, ” notes Bernstein.)
“I’ve been listening to African music since I was in late high school,” he said.” This is going to be really exciting and it opens something brand new for me.”

The Town Hall Ensemble, featuring some of the best musicians in New York City comprises Nels Cline, guitar; Lakecia Benjamin, sax; Marika Hughes, cello; Marc Cary, piano and keyboards; JT Lewis, drums; Bria Skonberg, trumpet; Ricardo Rodriguez, bass; Scott Robinson, sax; Marcus Rojas, tuba; Mauro Refosco, percussion; Sara Jacovino, trombone; Christina Courtin, violin.
The Town Hall Ensemble was created by Bernstein and artistic director M.A.Papper in 2017 to perform a series of concerts revisiting the sound and spirit of landmark moments in Town Hall’s history, setting the stage for the venue’s 100th anniversary in 2021. Built by a group of suffragists (The League for Political Education) fighting for women’s right to vote, the Town Hall opened on January 12, 1921, as a meeting space to debate the important issues of the day.
Since then, many artists-activists have taken to its stage. Baaba Maal, who throughout his career has often embodied the notion of artistic excellence in service of social change, stands as a continuation of the Hall´s special mission.

“From very early on he became such a warrior for social justice,” said Bernstein. “It’s so fitting we are doing this concert with him.”
In the early 2000s, Maal was appointed as a youth emissary for the United Nations Development Program (2003), and a global ambassador for Oxfam, focusing especially on women’s and children’s rights in Africa.
He has stated that he intends “to be the voice for the people in Africa’s rural communities. I want to offer them a chance to be part of the future development of Africa.” His latest project, based in his native Senegal but with a broad African goal, is NAAN-K, an organization that focuses on farming, fishing, and raising livestock, framed in 21st-century technology.

Maal´s most recent album was The Traveller (2016), which was accompanied by a short film with the same title. The film focused on his annual Blues du Fleuve festival, which takes place in the northern Senegal region of Fouta.
“I don’t regard myself as a politician,” Maal told The Guardian about his role as an artist. “But in our society, we use songs to express what the people are feeling. Musicians are closer to society in Africa – we use our voice to say what the people expect from their leaders.”

Musically, Maal is a curious and adventurous cosmopolitan seemingly always open to genre-blurring collaborations. His music has been a continuously evolving mix of traditional Senegalese music, various strains of Western music, and technology. His band, Daande Lenol (“The Voice of the People”) included Western as well as African instruments. The horn arrangements would hint at Soul, R&B or the vigor and spice of the great Latin dance bands. He has collaborated with music makers as disparate as Brian Eno, Howie B., members of New York’s Brazilian Girls, The Very Best, Jamaican guitarist Ernest Ranglin, and the British band Mumford and Sons.

“I’m a nomad,” he told London’s New Statesman. “I like to write music with people from all backgrounds, Celtic, Brazilian, urban, electronic … Me, I come from a traditional background, but I’m not afraid to go like a nomad into things like that. Traveling all over the world…talking to people, it’s really interesting to see how people are living, how they are thinking. Even the five minutes you spend with someone – just to say hello, to ask where they come from, it’s really inspiring. It opens your eyes and mind.”