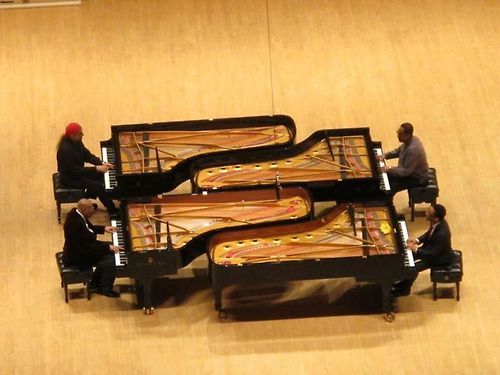 A few months ago, pianist Danilo Pérez explained that his composition “Bridge of Life” was about the theory of how the isthmus where his native Panama sits emerged millions of years ago, separating the oceans, yet also becoming a link between continents. “The piece is also a reference to that bridge that connects the worlds of classical music, jazz, and Latin music,” he added. “Some of it was written, but some of it was improvised.” And because some of the players were classically trained, he recalled, “it was difficult. But I did it that way to invite them to take a leap of faith, to jump and take chances. I told them we wanted to inspire people.”

Egberto Gismonti (Brazil), Danilo Pérez (Panama), and Gonzalo Rubalcaba and Chucho Valdés (both from Cuba) are not just brilliant players, but also exacting, restless composers and bandleaders. Educated in the European musical tradition and jazz—and also in the lived-in lessons of their respective indigenous music—each in his own distinct way, by choice or by default, continue to play the role of the creative artist as translator and explorer. And as they do, they ask both musicians and audiences to take chances along with them.

In their music, the conventions of jazz, European classical music, or folk music serve as a guide up to a certain point. Here is where the clichés about “Latin piano” meet the realities of Latin America and the Caribbean. And these are special artists, musically multilingual, who feel free to draw from all available sources and memories.

That the telling of a story starts in a certain manner implies no agreement that it will take you all the way through to some safe conclusion in the same language. That a rhythm now feels familiar won’t always mean that it will resolve as expected.

A given piece tonight might evoke the blues, but be set to a frevo or a rumba guaguancó, swing hard, but take the groove from a tamborito or carry a post-bop melody just as it hints at a Toque a Oshun. And it is also just as certain that tonight’s music will be informed at some point by the work and spirit of creators as disparate as Heitor Villa-Lobos and Peruchín, Ernesto Lecuona and Wayne Shorter.
The effect can be both disconcerting and exhilarating.
And if you don’t recognize all the labels and the names, know that it doesn’t make a bit of difference. The inspiration doesn’t come from what you know. It comes from the leaping.