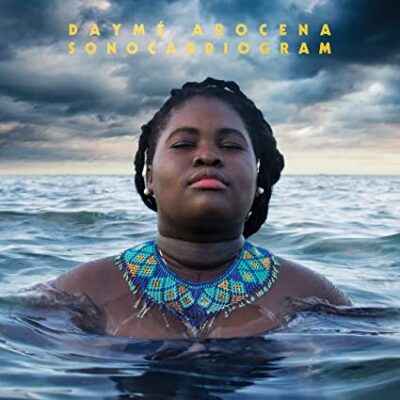 Sonocardiograma, the name of Cuban singer and songwriter Daymé Arocena new release is not just a title but also both a description and declaration of purpose.

“The name Sonocardiograma is inspired in the word echocardiogram, a medical exam to check if your heart is working properly,” explained Daymé in a recent conversation from her home in Havana, Cuba. “When we were thinking about the concept of the album and its title, we knew we wanted to create something that was a snapshot of who we are inside.”

The “we” Daymé refers to is her quartet, comprising Jorge Luis Lagarza Pérez, piano, and arranging; Rafael Aldama Chiroles, bass; and Marcos Morales Valdés, drums. “We not only always play together, and tour together but we celebrate birthdays together, accompany each other after breakups, console each other with family matters. We are a family,” she says.

“ We wanted it to capture our personality, our world, how we hear the music,” she explains. “We recorded it in Havana. There were no producers, and we didn’t want to go to a recording studio, and we lucked out and found this great space that had been an artist’s studio and we recorded there, all in one room, surrounded by art, cats and dogs and ambient noises. We wanted a record that had the energy and the spirit we have in concert. Sonocardiograma is about who we are.”

While the setting and the familial feelings may suggest looseness, Sonocardiograma has been meticulously designed and constructed.

The album opens with an introduction that leads to a suite-like trilogy dedicated to Oyá, Oshún, and Yemaya, three female Orishas, or deities from the Afro-Cuban Santería religion, of which Daymé is a follower. A snippet of a home recording of a ceremony at Daymé’s family place then serves as an interlude to the suite “Cinco Maneras de Amar” (Five Ways of Loving). Sonocardiograma closes with two tribute songs, one to Cuban singer Lupe Victoria Yoli Yamond, better known as La Lupe, one of Daymé’s inspirations; the other, a music collage dedicated to Cuban musicians titled “A Difuntos Presentes” (To The Dead Present Among Us)

“Nangareo,” the song that serves as the opening in Sonocardiograma, alludes to el Nangaré “a ceremony we believers hold the day we are going to do a divination,” explains Daymé. “At noon, when the sun is right above us, we ask for permission and that has its song and its ceremony. And that’ s how we did it: we recorded it around noon and we wanted to start our recording like that, asking for permission to the spirits.”

Santería is a syncretic religion rooted in Yoruba beliefs and traditions blended with Roman Catholic elements, hence the name: the way of the saints. Its music is anchored by a trio of batá drums, two-headed hourglass-shaped drums of different sizes that communicate with the spirits through precisely defined, intricate rhythms. The lyrics are in ancient Lucumi language which has been passed on down for generations.

“For the trilogy we wanted to translate the language of the batá to the trap set so we called on another drummer, José Carlos Sánchez, to recreate and update the dialogue between the three drums,” says Daymé. “The home recording is from a ceremony at home. What you hear playing and singing is my family— my uncles, my aunts, my cousins — and that is just the end of a song for Yemayá.”

While she grew up surrounded by Santería,  “I was never interested in it,” she says. “I was a bit scared of it, actually  — the spirits, the ceremonies, seeing people possessed. But the religion got to me through the music — and on a record, not in a ceremony. It was from classical music and Cuban composers such as Amadeo Roldán, Ernesto Lecuona, Alejandro García Caturla. What I heard was sublime.”

She was 17 and studying at the conservatory and, she says, “that’s when I decided that I wanted to fusion my music with this roots music. That’s when my music esthetics really began to take shape. I became a Santería follower much later, at 22. It took me all that time to go from the music to the practice. The music helped me understand my roots and maintain that family tradition.”

The second half of the recording includes the suite “Cinco Maneras de Amar” and focuses on love — love lost, love found, impossible love — all related to Dayme’s true, personal stories, but ending in liberation, as she sings “Living with sadness forever is not for me”, in the suite closer “Not For Me.”

“I’ve just got married to my best friend, ” she exults, before breaking into a laugh. “So no, I’m not suffering. I’ve learned my lessons. I’m singing to my man and telling him ‘I don’t want to suffer anymore, I know who I need and who I need is you.’”
The album closes with tributes to people who have long passed but whose spirits continue to inspire, an important concept in Santería. “The santero has a saying: ‘From the spirit of the ancestors, a saint is born’,” explains Daymé.

“Plegaria a La Lupe” opens with a snippet of “Que Te Pedí” sung by La Lupe with the Tito Puente Orchestra,  a song Dayme’s grandmother used to listen to. “I remember I heard La Lupe singing ‘Fever’ and she killed me. I had never heard a Cuban singer interpreting a jazz standard in English. But I especially loved was that even singing in English, even singing a standard, she was so Cuban. She would be singing a standard and break into one of her ‘Ay!, Ay!, Ay!. It was insane,” she says with a chuckle. “But she was so true to herself, so honest, so sincere. La Lupe was the person who made me want to simply be myself. Forget the world and what it wants, be happy being yourself.”

Meanwhile “Homenaje” (Homage) is a musical collage of gestures by “Cuban musicians who have inspired us and are no longer with us,” such as pianists Emiliano Salvador and Lili Martínez, tres player Arsenio Rodríguez, and the great singer Merceditas Valdés. “They are the foundation,” says Daymé.

“I am so happy with this record,” she says. “What I hope is that the listeners feel that love of life, that embracing life and wanting to succeed — but no succeed in the banal terms of making some money or being famous. I’m talking about being happy by being who we are, doing what we love, and staying open to whatever may come.”